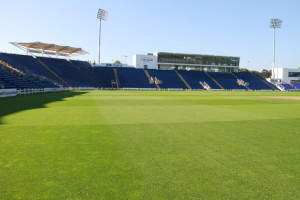 The ECB sent a consultant to view the pitch on Monday and a separate report has been filed by the match officer.

These findings will be presented to the ECB's discipline commission, who will decide "on the appropriate steps".

Glamorgan are also conducting their own investigation into events.

When asked if head groundsman Keith Exton would remain in charge of preparing the Swalec Stadium pitches, chief executive Hugh Morris refused to give assurances over his future.

Exton has been interviewed by the ECB, as have the umpires, both captains and coaches.

Morris told BBC Wales Sport he has no idea why the pitch at the Swalec Stadium deteriorated to such an extent, having been used without problem on Friday for the One-Day Cup match against Essex.

"That will be the centre part of our investigation," said Morris, who admitted the abandonment was a "dark day" for the county and did not know what kind of punishment Glamorgan could face.

"We were surprised how much the pitch had actually changed in the nature of how it performed for seam bowlers.

"Just three weeks after hosting a fantastically successful Ashes match, the last thing we wanted was something like this."

Exton was appointed by Glamorgan in 2008, seven months before the Swalec Stadium staged the opening Test of the 2009 Ashes series.

Along with the rest of the ground staff, he will be interviewed as part of Glamorgan's investigation, and Morris stopped short of guaranteeing whether Exton would lead the preparation of the pitch for the T20 internationals.

"We'll prepare that pitch as well as we possibly can," he said."We got a good mark for the Test pitch and there's absolutely no reason that we should receive anything other than a good mark for a great occasion."