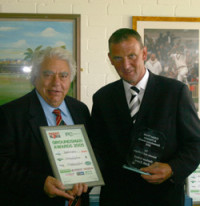 Glamorgan Cricket are delighted to announce the appointment of Keith Exton as their new Head Groundsman. Keith joins the Club from Oakham School where he has worked as Head Groundsman for 16 years.

During his time at Oakham School, Keith played a key role in ensuring that it became recognised as a benchmark for public school cricket and sports pitches and amongst the schoolboy cricketers to benefit from his top-class wickets was England pace bowler Stuart Broad who attended Oakham School.

Keith will work alongside Chief ICC Pitch Consultant Andy Atkinson who has recently overseen the installation of the new £600,000 drainage system and the re-turfing of the outfield at the SWALEC Stadium.

Andy Atkinson said; "Keith is the perfect man for the job. Looking after a Test Match Ground is a great responsibility and I am thrilled to be working alongside a man of such experience."

Glamorgan Cricket's Operations Director, Simon Lee added; "Securing a high-calibre individual such as Keith is a tremendous result for the Club. Keith comes with an excellent reputation and we are delighted to have him on board."

Commenting on his new role, Keith said; "Coming to Cardiff in its first year as a Test Match ground will be the absolute pinnacle of my career. I am delighted to join the team at Glamorgan Cricket and cannot wait to get started."

Keith will take up his position at the SWALEC Stadium on 1st February.