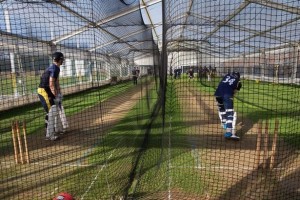 Glamorgan have stepped up pre-season preparations ahead of the 2014 season by being the first county to begin training on grass in the last fortnight.

This was following the installation of a marquee over the Swalec Stadium outdoor nets to facilitate net practice on grass, prior to the middle being ready.

Glamorgan play their first pre-season friendly at Bristol on March 19 and captain Mark Wallace has been pleased with the new facility as well as how pre-season is progressing for the squad.

Speaking after the first session in the elite covered grass training area, Wallace said "It was good to get out and play in the indoor nets, albeit under a marquee today.

"Everyone knows how wet the weather has been through the winter, so to be training outdoors on grass so early in pre-season is a credit to hard work and innovation by the club to help us players prepare.

"We had a similar facility set up last year which was great, but this year it covers the entire outdoors training facility, not just part, so it's bigger and better, the head groundsman plus his staff have done a great job to get it up and running so early for us.

"I think we are the first team to train on grass this year, certainly in this country.

"It was warm inside, there a few of the boys got caught out with beanie hats and jumpers, thinking it was going to be cold outside.

"But the marquee does its job, it's like a green house, so they started to get a sweat on. The humidity allows the ball to swing too, which is how it will be at the start of the season.

"The seamers did enjoy it, but there was some good batting as well.

"We have worked hard all winter indoors, but there is nothing quite like replicating playing outside so that's what we are trying to do, and the first session has been good."

The players have been able to do some fielding and fitness practice out on the pitch this week for the first time as the countdown to the new season draws ever closer.

Wallace added: "If we can get some good weather before the start of the season then great for us, but knowing we have the marquee in place is excellent regardless of the weather.

"We had our first net in there today, it was really good, the outdoor conditions really make it feel like the season is upon us now."

Glamorgan membership is still available to purchase from just £60 with all members guaranteeing the right to buy an Ashes ticket for the Test Match at the SWALEC Stadium in 2015. Also for supporters of the shortest format of the game, a T20 Blast Season ticket is now available priced £50 which gives access to all seven home T20 fixtures, six of which are on a Friday night in 2014.