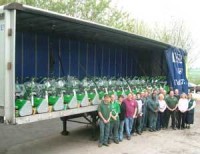 Keeping Glasgow's grassed areas in trim has been enhanced now that the City Council has substantially expanded its fleet of Dennis pedestrian cylinder mowers, supplied by local dealer Fraser Robb.

No less than 34 new machines were recently delivered to Council grounds maintenance staff, bringing Glasgow's total to 47 units of various working widths. This makes the city one of the biggest users of Dennis equipment.

Scotland's largest city achieves maximum efficiency from the Dennis machines, which accept easy-change 'cassette' attachments. This enables cutting, scarification, aeration, brushing and other key tasks to be undertaken by the one prime mover.

Glasgow's fleet buyers appreciate the low vibration of the units, which are used on a wide range of sports and amenity turf.

Both the city's famous football clubs Celtic and Rangers are also fans of the quality-built units, using two G860's each on the hallowed turf at Celtic Park and Ibrox.