Glendale are established as a leading provider of green service solutions to the public and private sectors, with a portfolio of operations including grounds management, countryside management, amenity horticulture and golf course management. Over 300 parks are in the care of Glendale, which employs 1,500 people nationwide and is the largest operating division of Parkwood Holdings plc.

Glendale attribute their success to having a thorough understanding of clients' needs and integrating seamlessly with their operations. And these are qualities that the Preston-based company looks for, in turn, from its equipment suppliers. Over the last five years, Glendale have built a strong relationship with Campey Turf Care Systems of Macclesfield, the suppliers of specialist grounds maintenance machinery. They have just supplied Glendale with a substantial order, including six New Holland TDD 75 and 85's, which is the new model, five New Holland MC28 tractors with Trimax front-mounted flail decks, three Trimax Pegasus wide area mowers, plus a fleet of Dennis mowers and a substantial amount of other equipment. 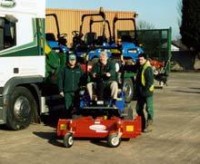 Angus Lindsay, Glendale's Machinery Manager, says that he has established a strong rapport with the company's Managing Director, Richard Campey. "Richard fully understands our needs and is extremely knowledgeable about the products his business supplies. The backup service is brilliant. If it's a manufacturer's problem it gets sorted immediately, and if our staff need extra training or instruction, it's provided. Everything is done on time, which maintains Glendale's productivity."

Glendale have complete trust in his judgement. Indeed, it was on his recommendation that the contractors switched to New Holland tractors, since he believed they would be better suited to Glendale's needs. "They literally suit us down to the ground, and they are rugged performers without being overly complicated, "says Angus Lindsay.

This latest tranche of equipment should last 6-8 years before being replaced, and Campeys will be strong contenders for re-supply when that time comes. "Richard is totally committed to the products he supplies, and he gets similar commitment back from Glendale once our decision to purchase has been made," explains Angus Lindsay.

The company have already started to deliver the new equipment to Glendale's depots nationwide. The operation has offices across the UK, from Sunderland and Manchester in the North, to Birmingham, Warwick, Lewisham and Portsmouth in the Midlands and South.