by Neville Johnson
in Equestrian
on 22 Jul 2012 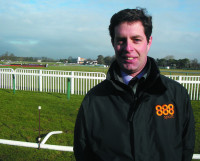 The one mile four furlong course at Brighton is one of only four in the whole country that is not a circuit. It's in good company, because the others are Epsom, Goodwood and Newmarket. It's actually said to run very like the Derby course and be a fast one too. In the 50s and 60s, trials of the top classic were held there to bear out it's worth as a top track. As Ed Arkell emphasises, Brighton does roll about quite a bit and it's a real test for horses. It dries out quickly as well so, often as not, it does offer a speedy surface.

Ed, and Brighton's Head Groundsman, Richard Langley, share the declared aim of making sure this horseshoe-shaped course is always safe, even if fast. For both of them, race day is long, very long, especially when it's an evening meeting like this one.

The season at Brighton begins in April. The May Madness evening meeting, the second of eighteen between then and mid-October, was an intriguing invitation to this novice race goer, and not just to sample the tribute band.

Approaching the course, which is on high ground to the east of what is now the City of Brighton, it looks marvelously green, testament to the unceasing spring rain. It's early, very early, but I can make out two figures slowly, deliberately edging down the hill towards the grandstand. Ed and Richard are walking the course, as they do often and as race day demands on this particular occasion. 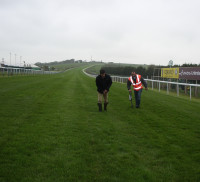 The going-line is a Racecourse Association service, which collates all the up-to-the-minute information on course conditions for race meetings on any particular day. It then fires out a press release to all interested media, so everyone with even the slightest interest knows what's in store for all the horses running that day - at least in terms of turf.

"I then have to update the Racing Administration website," adds Ed. "Trainers, jockeys and everyone involved in the business of racing has access to this. It's a bible, and one-stop shop for information, if you like, on all there is to know about meetings for the coming ten days."

The last stage of this before-breakfast admin was to send a personal text to all the trainers who had a horse running that evening, telling them about going, weather and any watering they might have had to do. This isn't a ruling by the racing authorities, it's a policy of course owners, Northern Racing, a personal touch and sound PR that does nothing but good, Ed emphasises. Northern is pretty much the biggest course owning name in UK horse racing, especially since its merger, earlier this year, with Arena, which brought major tracks like Lingfield, Doncaster and Wolverhampton under its wing.

For head groundsman Richard, race day is mostly a matter of keeping a close watchful eye on things. During racing itself that means being stationed at the 2-furlong

mark, poised, in the worst case scenario, to stop the race. That rarely happens, but racing is a dangerous sport and conditions are sometimes out of the hands of even the best groundsman.

Richard, who worked previously at Wolverhampton and Kempton Park, points out that Brighton is a course with microclimates, especially in spring. Wind, visibility and surface conditions can vary considerably from one part of the horseshoe course to another. Frost pockets are a particular hazard.

There aren't many courses where road conditions are within a racecourse groundsman's remit either but, at Brighton, Richard has two on his race day agenda. Wilson Avenue, near the six furlong start, and Manor Hill, slap in the middle of the after the post run-off, have to be covered with coconut matting prior to the first 'off' until the finish of the last race, and overlaid with two inches of fresh grass cuttings for each of the races. They look and act like level crossings and are dutifully manned. Traffic waits patiently for the horses to pass. It's the same while these mini sections of artificial track are set up. Motorists don't seem to mind, either intrigued by what they're seeing or just used to this very occasional disruption. 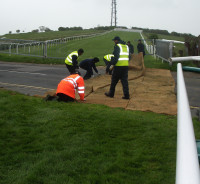 "The racecourse was here long before the roads, and racing takes customary precedence over cars and lorries for a few minutes on a few days throughout the year," says Richard. Records show that there's been racing here for over two hundred years.

"The grass cuttings provide essential cushioning for the horses and it also looks just like turf," says Richard. "The brown of the matting could well startle some horses, and it's not a risk we can take. Vehicle traffic does cause movement, so we also have to readjust the matting before each race and fill any gaps with Visco-ride, an artificial surface like fibre sand."

The road matting work and general course duties, like forking back hoof divots, are carried out by workers provided by Sterling Services. The Uxbridge-based company provides a race day labour force for racecourses up and down the country, and its workers are a familiar sight to racegoers.

Richard actually has a dual role. He is also the course's site manager, which means he has a whole host of general duties. Among these, he told me, is looking after any over night arrivals - horses, trainers and jockeys that is. 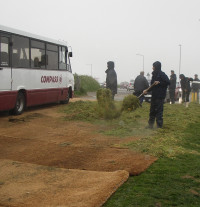 The evening before, all associated with a runner in the first race, Heavy Metal, had travelled down from Yorkshire. Richard had made accommodation arrangements for the personnel and kept a close eye on the horse, bedded down in one of the on course stables. He also checks during the night that any horses so housed are fine and safe. Richard told me that he always reckons overnighters mean business and have high hopes. He wasn't wrong, because Heavy Metal romped home at 7-4. This course correspondent admits he made use of the 'insider information'.

Watering is normally a big issue at Brighton. There's only a maximum of eight inches of sandy topsoil and, in places, this is as little as four, overlaying South Downs chalk. It dries out pretty quickly.

"In a normal summer, it's a real struggle to keep to the course as lush as it is now in early May after all the rain we've had," says Ed Arkell. "We just can't get enough water on, even though Southern Water currently do not place any restrictions on our usage. If drought does take a real hold, we have plans in place to cut our water usage and, perhaps, we would even go as far as shortening race lengths."

Richard's usual routine would be to water the whole course over a two day cycle, starting as far in advance of the meeting as necessary. Not so for May Madness. God had done the job for him - and forgotten to turn the tap off.

"We try to achieve good to firm going, and our Briggs Irrigator does a good job but, for our first two meetings this year, we haven't had to use it at all," he said. "When drier conditions take hold again it'll be called into action."

The Irrigator was developed specifically for the racecourse, and has variable droplet size up to 35mm to help achieve the desired going. The spring rain had temporarily lightened its workload, and that of Richard and his three full-time groundsmen.

Even with all the rain, the grass on the course hadn't grown as much as usual, Richard told me. "We would normally cut the track the day before a meeting and generally twice, maybe three times a week," he said. "Here we are, in the first week of May, and we're just about cutting once a fortnight. There's been a lot of rain, but the temperatures are so low."

The track area is a mixture of ryegrass, fescues and annual meadow grass - typical downland. Richard says that they've been introducing more perennial ryegrass. Fescue quickly goes brown in dry times and looks less appealing to racegoers, and presumably the horses too. "Ryegrass is much easier to look after and, of course, the root structure is better, which helps with the stability of the turf on our thin topsoil," he said. 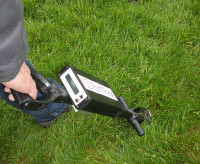 The British Horseracing Authority stipulates a three to four inch grass length for flat courses. Richard cuts the Brighton track to four, using a Votex front-mounted mower. He reckons this is the perfect length for the type of course it is. Any longer and it can tend to lay over, which is a potential problem on an undulating, twisting course like Brighton is, causing horses to slip, he says.

Ed Arkell, who has twenty-four other meetings to manage on top of his Brighton responsibilities, summarises the pre-meeting routine for runners. Race entries come in six days before race day via the Wetherby's organisation, but it's forty-eight hours before the 'off' that is crucial to everything. It's when declarations to run are made, and the deadline for this is 10.00am that day. Ahead of this, at daybreak, he and Richard walk the course at Brighton - as counterparts would do for all race meetings - to check and report the going, essential information to trainers.

"Once we've said what the course going is, we have to ensure, as far as possible, it's the same on race day," says Ed. "For National Hunt, it's just a twenty-four hour time lapse, so over the flat there's more of a chance that conditions will change and maybe more work to do. For evening meetings, like this, there's even more time for things to change."

Ed does a second race day course walk two hours before the first race. This time it's with the Chairman of the Stewards. This is a required independent assessment and he - or she - satisfied that the track is safe for racing, signs it off in official documented form.

Stewards are appointed by the British Horseracing Association, and are trained and examined to qualification. They know what they're looking for, says Ed, who has a panel of eight covering Brighton. Three of them attend each meeting, one acting as chairman. He works out a rota for the whole season, so he always knows who'll be officiating. On the whole they are racing people, but they don't have to be. On Ed's panel at the moment are two directors of Waitrose and an antiques dealer.

"This walk is a vital point on race day," he says. "If things go well, there isn't too much more to do but, like Richard, I have to be on the alert in case anything goes amiss. Last year, a horse bolted on to the Brighton golf course and then headed for the city centre. We don't often get mishaps, but you can't take your eye off things."

By and large, horses run the same line the length of the horseshoe track. When the going is soft, they come down the hill stand side. When it's dry and faster, they favour the far side.

"I think the reason for this is that there is more divot mix and it cuts up on the far side and, therefore, is looser," says Ed. " When there's weather about, the thinking of jockeys is that the stand side provides less damaged going. Personally, I'd agree, but this early in the season I'm not sure that it makes much difference."

Conditions for the May Madness meeting got murkier and wetter as the day wore on. The betting was runners would take the stand side route. They did indeed.