Dateline January 2009: Throughout the winter I had been keeping in touch with the progress of the new square at Voorburg Cricket Club via my now good friend, Frits Makkee, and the pictures he constantly emailed to me.

One concern which became very apparent during my visits to the clubs with grass pitches, and discussions I had with the people who were maintaining them, was the knowledge available in Holland on the preparation and maintenance of them. There also seemed to be a problem with having the correct equipment to carry out the work required. 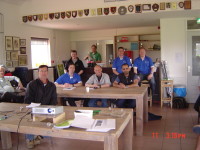 During my discussions with Frits and Tim De Leede at Voorburg Cricket Club, and with the guys from Kampong Cricket Club and VOC, I suggested that it might be useful to run a training course for anyone involved with the preparation and maintenance of Dutch cricket pitches and squares. Frits and Tim agreed that this would be very useful and said that they would organise for it to happen.

In the meantime, I informed Ian Lacy at the IOG, what my intentions were and that I would be conducting the course myself. Ian offered me any assistance that I might require to carry out the course, recognising the importance of the project in developing cricket and cricket groundsmen in other countries.

Back to the organisation of the course. Frits and Tim had been very busy contacting the clubs with grass squares, and the response was encouraging, with about thirty people interested in attending the course. This, of course, would be too many people to train in one group, so I suggested that I deliver the course at two venues.

I travelled over from Harwich to the Hook of Holland on Thursday 9th April, arriving in Holland at 4.30pm. Accommodation for the weekend was kindly provided by Frits.

On Friday I went to look at the progress of the new square at Voorburg, and helped to set up the new equipment that had been purchased in the UK to maintain the square.

It was growing well and was showing good root establishment. The boards that were used to level the square had been removed, and it had been topdressed and overseeded. This work had been carried out in March by Chris Boniface as part of his contract with Voorburg CC. 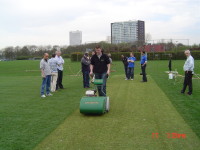 On Saturday, I made my way to Kampong CC Utrecht, arriving at 8.30am, and prepared to deliver the training to the fifteen delegates booked for the course. Peter Cantrell and Mike Farrant, who look after the ground at Kampong, as volunteers, had arranged for the local Dennis Mower agent to bring along a machine and the cassettes for demonstration during the course.

The delegates all assembled in the pavilion and it was time to start. It was then that I realised I was assuming that all of then would understand English! Fortunately, they all did - except the guy from New Zealand - but then they do have trouble with "not out" when they appeal!

Seriously though, the day got off to a good start. I outlined the day and went through the processes of preparing a pitch to match standard. Some very good questions were asked from the floor and I enjoyed the session because of this interaction.

A coffee break was taken and then it was down work, preparing a pitch on the square with everyone taking part. I had brought with me a Sisis Combirake because, from earlier discussions, it became apparent that none of the clubs had one. 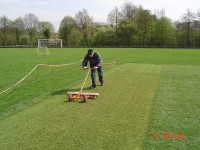 I went through the ten day preparation of a pitch, demonstrating how each step should be performed, using the correct equipment.

All who attended the course simply had no idea how much work was required over a ten day period, or the importance of having the correct equipment, just to produce a satisfactory pitch.

I also explained how important it was to carry out repairs after the pitch had been used. The groundsmen at Kampong made it clear that the course was a success, because it highlighted that they were not using the correct methods of preparation.

The whole show then moved to VOC Rotterdam on Sunday and was repeated using the same format. One problem came to light during the practical demonstration, and that was that the mowers had never been serviced and would not cut cleanly - hardly surprising!

I stressed the importance of well maintained machinery - not just the mowers - when preparing pitches. The club simply did not have the correct equipment for the production of good pitches. They were all amazed at the amount of raking I did with the Combirake to produce the first preparation of the pitch.

Kampong and VOC have hosted international cricket in the past, and I think they are now better placed to produce good quality surfaces for all cricket. 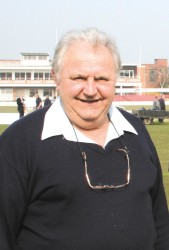 The courses were attended by representatives from four of the clubs with grass pitches - Excelsior 20 Sheidam, Voorburg CC, VOC and Kampong CC. There were also umpires and players in attendance.

On reflection, the weekend was a success and the feedback I received was positive. All who attended said they had found it interesting, and they were able to understand the processes required.

I was then asked if I would put on an end of season renovation course, because they also felt they were not doing that work to the standard required. I must say that this was evident in the established squares that I looked at.

With the courses completed, I made my way back to the Hook of Holland to catch the Sunday night sailing back to Harwich, reflecting on the hospitality shown to me during the course, and would like to offer my special thanks to Frits, Tim and the people at Kampong and VOC.

The story does not end here.