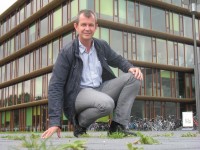 "Rather than re-invent the wheel, the UK can learn many useful lessons from the SWEEP initiative"

Long before the EU's Sustainable Use of Pesticides Directive (or its Water Framework Directive) were conceived, and around the time of the EU Drinking Water Directive 98/83/EC, which limited, to one part per billion, the acceptable contamination by pesticides in drinking water, a team at the Plant Research International B.V. at Wageningen University and Research Centre in Holland, set to work to understand how pesticides find their way into water from hard surfaces, and what can be done to minimise their impact. Led by Senior Scientist and Head of Research, Dr Corné Kempenaar, the research was supported by the Dutch water companies VEWIN, Water Board Hollandse Eilanden en Waarden, and manufacturers of Round-Up glyphosate, Monsanto.

The objective, of course, was to try to minimise water pollution, whilst obtaining acceptable levels of weed control on hard surfaces at an acceptable cost. Nearly 50% of Holland's drinking water is derived from surface water, so the problem was a big one to solve. 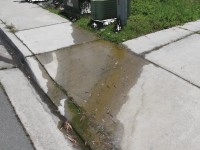 Further trials used urban areas of one to ten hectares of paved surfaces, where the run off into drains was analysed. Other methods of weed control, such as herbicide applied by weed wipers, very low dose applications of herbicide, spot treatment, sweeping regimes and heat-based alternatives were evaluated.
The result of the research led to the development of a programme called SWEEP (in Dutch: DOB), which was so effective that it was formally adopted by Holland into law in 2007. It probably leads the world in defining a cost effective integrated approach to weed management, meeting, years ahead of time, the requirements of the EU Drinking Water Directive, the EU Sustainable Use of Pesticides Directive and the EU Water Framework Directive.

So, rather than re-invent the wheel, the UK can learn many useful lessons from the SWEEP initiative, how it is operated and how it achieved success.

Trials on hard surfaces indicated that pesticide run off, using Monsanto's Roundup Evolution (equivalent to Roundup Pro Biactive in the UK) gave high levels of run off if rain followed soon after application. Within one to three days after application, run off was greatly reduced. So, as part of SWEEP, it has been agreed that the herbicide must not be applied if there is a 40% chance of rainfall, of more than 1mm per 3 hours, within 24 hours of application, as advised by the Dutch Met Office. Glyphosate runoff in SWEEP experiments was between 0.2% and 5.7%, much lower than assumed.

It was also established that accurate low level doses of spot applied glyphosate can achieve good weed control in conjunction with good sweeping practices. No overall blanket spraying is allowed and applications are limited to just 360 grams of glyphosate per hectare of hard surface in any one application, and 720 grams per hectare annually.

This use cap is related to the total surface area of open pavement in a contract or working unit (maximum 50ha). To us in the UK, used to applying 1800 grams per hectare (5 L/Ha) as an overall blanket application several times a year, this sounds pretty drastic but, when spot application at around 2 litres per hectare (720g/Ha) is made to around 50% of the overall area treated, then these targets are achievable.

Sealed tarmac surfaces are never blanket sprayed. For conventional hydraulic sprayers using water under pressure, all equipment must be fully shrouded to contain spray drift, and also fitted with weed sensors to automatically spot spray only where weeds are present.

Sprayers that are all shrouded, such as the Mankar ULV, which only apply 1-2 litres per hectare, fit this criteria, using neither water nor drift inducing pressure, just neat glyphosate.

The protection of water courses is a top priority, and particularly those drinking water catchments that feed water abstraction points. No spraying takes place within one metre of any water body in any situation. In these no-spray zones, other non-herbicidal methods are used, such as heat, steam and sweeping, or else herbicide applied only to the foliage of weeds, and not the ground, by equipment such as the Roto-Fix weed wiper, for instance.

A detailed map of water abstraction points is available on the SWEEP website (www.dob-verhardingen.nl/uk/General/) so that planners can define no-spray zones within their operating areas.

In the case of a fast moving water body leading towards an abstraction point, then no herbicide is allowed on feeder hard surfaces within 10km of the abstraction point. If the water is defined as slow moving, then this falls to 1km.

It is likely that, in the not too distant future, the EU's Water Framework Directive will head things in the UK in this direction. Fortunately, the UK has fewer of such vulnerable water sources, with drinking water often supplied by upland reservoirs, fed water from high ground.

The only herbicide cleared for general application on hard surfaces is the Monsanto product, which is the most effective at the low doses used and has excellent environmental credentials. The SWEEP system reduces the impact of pesticide water pollution by a factor of around 10, which is an impressive result by any standards.

Another impressive feature of the SWEEP system is that its component parts are available in three separate shortlists off the web site (www.dob-verhardingen.nl/uk/General/), that gives detailed guidance to all three levels of management and staff involved in implementing weed control.

Shortlist 0 is aimed at council area controllers and other policy-making officials to help them prepare a 5-year plan. Shortlist 1 is aimed at contract managers planning and managing a weed control campaign; and Shortlist 2 gives practical guidelines to operators applying herbicides where these are allowed.

This ensures the full coordination necessary between sweeping activities and weed spraying or other control methods, and gives a joined up overall system that delivers good weed control at a reasonable cost, while really protecting the environment.

The EU Directives that are currently being implemented in the UK will, undoubtedly, change a lot of our past practices, especially the high rate blanket application of herbicide on a regular basis. However, the experiences of Holland, built on many years of detailed practical research by Corné Kempenaar and his colleagues of how pesticides behave on hard surfaces, rather than relying on computer models to predict this (UK PSD practice), certainly guide the way forward.