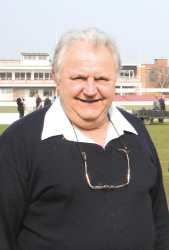 I am sitting on board the Stena Britannica heading for Holland once again. The purpose of my visit this time is to work with the groundsmen at Voorburg Cricket Club for the next two weeks, helping them to prepare the pitches for the U-19 World Cup qualifying games to be played at the venue.

Cricket has been played on the new square since late spring 2010 and a one day international was played late in the season of that year. The pitch was not the best for an international game, but was reasonable. This was expected because it was still a new square and the groundsmen were still in the process of learning how to prepare a suitable pitch.

The square construction was different to all others in Holland because it was designed for stability on an unstable subsoil. This has proved to be successful as there there has been no sinking of the square.

One problem I have encountered on my trips to Holland has been the lack of water in the profile when the weather is dry (although this was not the case last year, but the geese were happy). It is one of the most difficult things to get the water into the profile to depth, and judgement of this takes a lot of experience from the groundsman to know when and how much irrigation is needed. Even experienced groundsmen get it wrong sometimes!

I have often been asked how much water do I need to put on. Or, how long do I need to water this pitch and, quite simply, I cannot tell them. Irrigation depends on the weather conditions, e.g. has there been any rain, is it hot and windy, is there high humidity, is it cold and overcast, or any combination of these factors?

How many groundsmen know what the soil particle distribution is or have had an analysis of the soil done? This information is always obtained for PQS (Performance Quality Standards) assessments and is invaluable in helping to make an informed assessment.

It is always difficult to assess water content in the soil but, by taking a small core sample, it is possible to see how much moisture there is and to what depth. This can help when deciding on watering and how much to use.

I recently carried out an assessment and the core was exceptionally dry to the full depth of the sample. This would cause the pitch to play unevenly and would not give an even contest between bat and ball. This type of surface would also be difficult to get water into, to get it to hold together.

I have just looked through the window and the Dutch coastline is getting closer, so it will soon be time to leave the ship and drive to Vlaardigen where I shall be staying during my two weeks in Holland, and I shall continue with this article over the next two weeks.

The weather is hot and sunny. I have arrived at the Voorburg Cricket ground to watch a local derby match between VCC and VOC (Rotterdam). I have taken a look at the three pitches that are going to be used for the ICC U-19 World Cup Qualifying games (five in total) and have taken core samples to help me assess what would be required to get the pitches to the required standard for international matches. It must be pointed out that the pitch preparation had started the week before I arrived by the groundsman, Willem Ligtenstein, and his team. 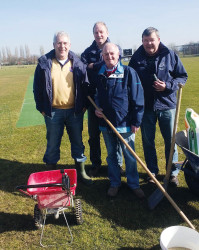 The cores showed a good root structure, no thatch present and no soil breaks. A soil particle distribution analysis had been carried out at the end of 2012 season showing clay levels at 36%, sand at 30% and silt at 34%. With clay content of 36% it would be possible to achieve a high standard surface, but it could prove difficult to manage without good covers during wetter, cooler periods of the summer. This is because of the ability of clay and silt to hold water, thereby being more difficult to dry out.

Pitch 2 on the square was very dry; pitches 4 and 6 had moisture in the profile because they had been watered two days previously.

It was decided to water pitch 2 thoroughly on Sunday evening and again on Monday to get the water to depth. The pitch was required for the first match on the 2nd August; Scotland v Jersey. Pitch 6 was not required until the 5th August as two games would be played on pitch 2, the second match on the 3rd August being Ireland v Denmark.

The preparations for pitch 2 consisted of rolling and watering over the next three days to get it hard and dry. Watering was carried out in the evening and rolling in the morning, whilst mowing lowered the sward to 6mm.

Some watering was carried out on the evening of the 31st July to pitch 2, which was necessary because of the excessive hot weather being experienced at the time. The pitch was taken to its final sward height of 4mm by power brushing and mowing until a consistent sward height was achieved. Rolling was carried out in two blocks of approximately twenty minutes, allowing drying to take place between the rolling. 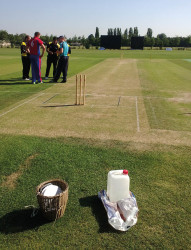 On the morning of the match, the covers were removed early and final preparations for play took place; brushing and mowing, a final roll for about twenty minutes and touching up the lines which had been painted the day before - we all know that players love to stand on freshly painted lines on the day of play, whilst practising some glorious make believe batting strokes, and getting in the groundsman's way!

Blue paint was used for the wide ball lines at the request of the umpires; this was totally justified as the white lines are difficult to see from the opposite end. The fielding marker discs were put into place and the toss was made, the pitch was now in the hands of the umpires.

I was asked by the ICC umpires' assessor how I knew the 15 yard markers started at 45 degrees from the centre of the batting crease as required by the laws of the game. I explained that the box is 8 feet 8 inches from return crease to return crease and it is 4 feet from the back line to the front line. The centre stump is at 4 feet four inches so, to create a square set, I put a pin 4 inches in from the return crease on the back line and pull the tape measure from the front crease on the centre stump line and on the line of the pin on the back line; this is 45 degrees, as it is the hypotenuse of a right angle triangle. I wasn't asked another question!

The pitch proved to be a good one with some pace and bounce and a little movement for the bowler with the new ball, but also allowing the batsmen to play their shots.

Immediately after the match ended, the pitch was power brushed, watered lightly to freshen it up and the covers were put on. In the morning, the covers were removed and the pitch was power brushed and cut, rolled for about twenty minutes and rolled again, after a break of thirty minutes, for a further fifteen minutes. The lines were repainted and the fielding discs checked for position.

The pitch played the same as the previous day, maintaining pace and bounce and allowing the batsmen to play their shots; everyone agreed it was a good pitch.

Now it was time to get pitch 6 ready for play as there was a day off for the players on Sunday.

Again, the pitch had been watered when required, with rolling taking place in twenty minute sessions. The weather was still hot and dry, so using water was an essential part of the preparations.

This time it was the home side, Holland, against Jersey. The visitors were invited to bat and, for the first ten overs, could not lay a bat on the ball due to some good pace bowling from the Dutch on a good fast track. With three wickets down, the batsmen then got to work, stroking the ball around the field with confidence and a young Jersey batsman scored a chanceless 101 off 81 balls The Dutch team had no reply to the Jersey performance and lost the game.

The next day, Holland were at home to Denmark, so the pitch had a light watering and was covered for the night The preparation was the same as pitch 2 previously and it proved to be a very good one, with the Dutch recording a resounding win.

The last round of matches and pitch 4 has been prepared for, what is believed to be, the deciding match between Scotland and Ireland, with Ireland needing to win for the tournament to be decided on run rate.

It was raining most of the day on Wednesday, although watering had taken place after the match on Tuesday before the covers were put on.

The weather has turned much cooler and, with this in mind, watering was limited to ensure a good pitch was produced. The weather was dry in the morning, so rolling was able to take place for about thirty minutes and then the covers were put on just before the rain arrived.

Willem Ligtenstein and his volunteer groundstaff were then busy removing the water from the covers, and taking them off, ready to start the final preparations with the usual power brushing, mowing to match height, rolling in two twenty minute blocks, placing the fielding markers and painting the lines.

Unfortunately, the Scotland side were too strong for Ireland and the game was a very one sided affair, with Scotland finishing as outright winners of the tournament.

The reports, from the umpires and officials on the ground for the tournament, agreed that the pitches were very good and played with good and consistent bounce and pace.

It is the end of the tournament and it is time for me to leave to travel home on the night sailing, leaving all teams and officials to enjoy a barbecue at the Voorburg ground.

As I was leaving, the last spectator was reluctantly being ushered from her favourite spot on the ground which was, of course, cow corner!