Terrain Aeration has provided services to relieve compaction of soil at Hyde Park. The company used its Airforce Terralift and SuperScamper machines. 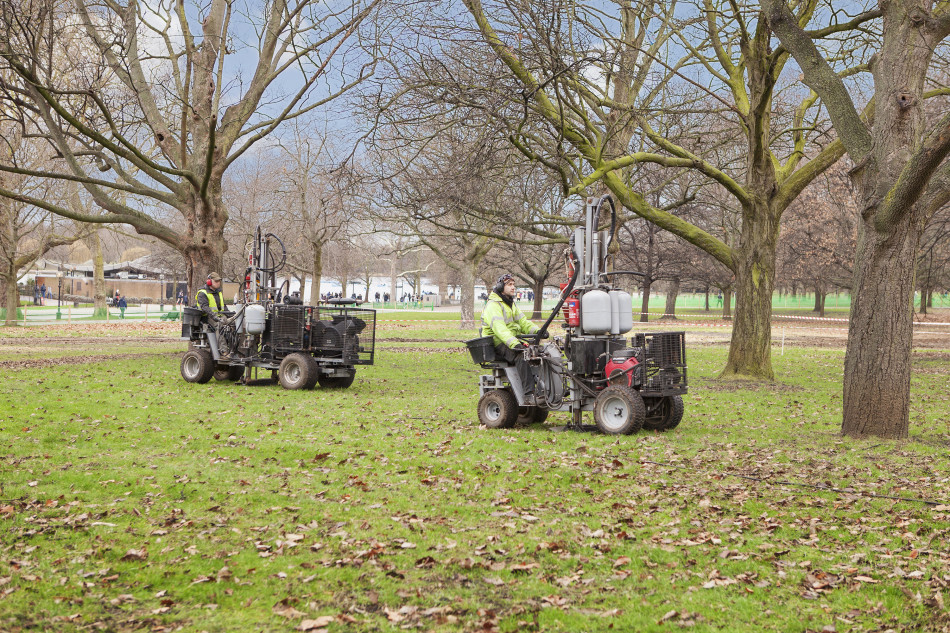 The latter works in conjunction with a towed compressor is therefore a lighter machine producing less weight on the turf surface. The primary areas to be treated were north of the Bandstand, an area of 10,200 m2 with sycamores and elms, and the ash tree circle north of Serpentine Road, an area of 892 m2

Before work started it was necessary to radar scan for underground services and mark out the areas to be treated. The Terralift hammers a hollow probe one metre into the soil, releasing a blast of compressed air to fracture the compaction and injecting dried seaweed which will expand and contract with the moisture content in the ground.

The probe is inserted in spacings of two metres on a grid pattern, to ensure the underground fracturing overlaps. The resulting holes are top-filled with Lytag, lightweight aggregate to provide a long-term aeration and ventilation shaft which will encourage air and water into the root zone. The result is a healthier soil structure, the compaction is relieved and a stronger root growth is promoted.

This particularly applied in Hyde Park in the areas around the trees.Terrain Aeration have also treated the area around the Horse Chestnut group in Kensington Gardens to the east of Broadwalk and in Regents Park, the area beneath the canopies of the first and second line of trees between Chester Road and Ready Money Fountain. An area of two thousand five hundred square metres beneath canopies of Norway maples at the southern end of Marylebone Green has also had the Terralift treatment.

"We have used Terrain Aeration's services for a number of years now," says Ian Roger, Royal Parks' Arboricultural Manager, "and their programme of decompaction of the soil beneath some of our most stressed trees will have long-term benefits, extending their viable lifespan, and ensuring their continued contribution to the amenity of the park and the environment."