1 Going underground - where does potash come from?

So, where does potash come from? Laurence Gale dons some rather natty orange shorts to meet up with Neil Rowley of Cleveland Potash, to discover the answers

It's not every day one gets the opportunity to go down a mine, especially one of the deepest in Europe, and one that spreads several miles laterally under the North Sea. So, when an invitation came from Sam Cassidy, Marketing and Communications Manager (Turf & Amenity) at Everris, formerly known as Scotts Professional, I jumped at the chance.

Everris is now part of the ICL Speciality Fertilizers Company who globally mine for minerals for use in the horticulture and sports turf industries.

Their Boulby Mine is situated on the North East coast, between Whitby and the Tees estuary, and has been operational since the early 1970s. It is run by Cleveland Potash.

I was joined on the tour by other members of the press, and we assembled in the offices for a briefing about the mine and how it operates.

We were given an introduction by Neil Rowley, their former health & safety/mines officer, who now coordinates the weekly mine visits. 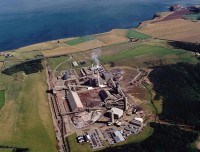 Neil worked at the facility for seventeen years and is, consequently, extremely knowledgeable about the mine and how it operates. He explained how the company came to be mining in Cleveland, and how they mine the ore on a daily basis, describing the techniques they have developed to make it a viable operation.

There were times, in the past, when the cost of the potash was too low to make it economical to mine. However, a series of events in other parts of the world led to an increase in the price of potash, thereby making it a viable commodity at around £300 per tonne.

He described the investment involved and the size and scale of the operation. The mine employs over 900 people, of which 600 work underground, operating a full 365 days - a six days on/four days off shift programme.

Cleveland Potash, a business unit of ICL Fertilizers, is a producer and supplier of potash fertilisers for agricultural and industry uses. Boulby is the United Kingdom's only potash mine, from which 2.4 million tonnes of potash and 0.8 million tonnes of salt is produced each year.

Customers use their high-quality potash products for fertiliser production, glass making and applications in the chemical and pharmaceutical industries. Cleveland's salt products also meet a variety of needs, from road maintenance to sugar beet cultivation and as an ingredient in animal feeds.

In the 1960s, with fertiliser demand growing and the UK reliant on imported potash, ICI decided to develop reserves 40km from its Cleveland facilities in north-east England. The 200ha mine site is at Boulby, hence its name.

Construction started in 1969 and the first product was delivered in 1973. To ship the potash, a new ship/road/rail terminal was constructed at Teesdock.

ICI formed Cleveland Potash Ltd (CPL) in a joint venture with the Anglo American group, but subsequently sold its stake to Anglo American. In 2002, the "non-core" business was sold to ICL Fertilizers, a division of Israel Chemicals Ltd.

Boulby potash occurs at depths between 1,200 and 1,500 metres in a seam ranging from 0-20m, but averaging 7m, in thickness. Within a permian evaporite sequence, sylvinite ore comprises 35-45% sylvite (potash) and 45-55% halite (salt), plus impurities.

Potash, or carbonate of potash, is a mixture of potassium salt with impure form of potassium carbonate (K2CO3), commonly known as the element potassium (K). Potassium occurs abundantly in nature, being the seventh most common element in the earth's crust. Some clay minerals, which are associated with heavy soils, are rich sources of potassium.

Potash bearing rock deposits occur in many regions of the world. They are derived from the minerals in ancient seas that dried up millions of years ago. Fertiliser potash is mostly derived from these potash rocks. It requires only separation from the salt and other minerals.

Most of the world reserves of potassium were deposited as sea water when ancient inland oceans evaporated, and the potassium salts crystallised into beds of potash ore

Sinking the 5.5m-diameter, 1,150m-deep shafts through the sandstone was achieved by ground freezing and grouting of the rock shaft. Although the basic concept of roadway development in salt to access room-and-pillar potash panels was sound, determining the most efficient mining system proved difficult, and it was not until 1984 that CPL reduced mining costs sufficiently to achieve profitability. 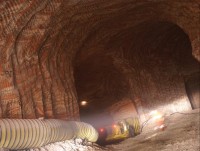 Today the mine produces around 10,000 tonnes of material per day, mining potash five days a week and salt two days a week.

To cope with greater stresses in the ore below 1,200m, and to raise output above 3Mt/y, CPL converted its continuous miners to remote-controlled operation (so they can be safely used in shaly sections without prior blasting).

The mine has a digital micro-seismic monitoring system, covering the full extent of the mining work, to provide warnings of how the mine is coping with the pressures and stresses of the operations. There is a two roadway system, one for transporting miners and equipment to the face and one to return the materials back to the surface on conveyor belts. This achieves more mining per shift. Jeffrey and Joy are the names of continuously operating, radio controlled mining machines that discharge to electric shuttle cars which, in turn, run to feeder breakers on the main conveyors to the hoisting shaft.

CPL's refinery separates potassium chloride from the salt in the sylvinite ore and recovers three potash product grades. Following impact crushing and rod milling, de-sliming units feed underflow for salt and impurity removal by flotation, whilst the overflow is classified and treated by filtration or slime flotation. The de-watered and screened flotation product is standard fertiliser-grade potash, some of which is converted to granular grade by a compaction circuit. 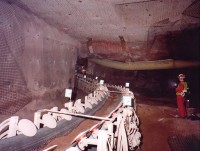 The potash recovered by filtration and slime flotation is directed to crystallisers, which normally yield a soluble potash product.

The fertiliser grades are sold for either direct application or complex fertiliser manufacture, soluble potash for industrial applications, and salt primarily for road de-icing.

After the mining process had been thoroughly explained, we made our way to the pit head, donned our Personal Protective Equipment (PPE); reflective overalls, boots, shin pads, hard hat with miners light, and safety belt. The belt holds the battery and spare oxygen mask.

The lift descended at approximately 25 feet per second. It was an eerie experience and, surprisingly, the temperature down in the bowels of the mine was quite hot, hovering between 35-45°C. Air is circulated by giant wind turbines, constantly pumping air into the mine to improve air quality and to control temperatures. It was a very dry and warm environment, so it was important to remain hydrated, taking on board plenty of water.

Once out of the lift, we entered a large reception area which, in turn, accessed other tunnels that provide storage areas and workshops for servicing the machinery. 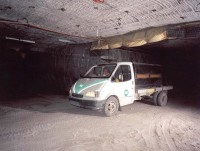 Transport to the work face is provided by Land Rovers and Ford Transits, all specially adapted to operate in this environment; for example, speed restrictors are fitted to limit the top speed to just 25mph.

Neil Rowley transport us to one of the production areas in one of the Land Rovers, travelling six miles along some interesting roadways. These are excavated through the salt bed rock, which provides a more substantial and longer lasting base than potash; the roads can last up to fifteen years before the roof begins to cave in. Special monitors are placed in the roof to indicate any movement.

The miners have also developed a roof bolting system to prolong the lifespan of the corridors. A four foot long bolt is drilled and glued into the roof at 1-2 metre centres.

Along the way we stopped at various points to see how the mine has developed, and to witness the sheer size and scale of the engineering involved to keep everything running - thousands of miles of electric cabling, water, air and other services.

Over 3,000 gallons of water a minute are pumped from the mine, most of which is used in the processing of the raw materials once they have been brought to the surface.

We eventually got to the furthest part of the mine, six miles under the North Sea, to witness the excavation of potash. It is surprising how quickly the machine can excavate the raw material, load and transport it to the awaiting conveyor belts, which run the full six miles back to the pit head.

The miners are paid bonuses for the amount of material they produce, so it is a case of all working together to maximise output.

We took the opportunity to grab some mementos of our visit, in the form of some raw potash rock, before getting back in the Transit for the return journey. It was surprising how quickly the time had flashed by; we had been down the mine for over four hours.

Feeling rather tired after our expedition, we were keen to get back above ground and have a final debrief about our day. The lift brought us quickly to the surface and back into daylight. We submitted our return tokens to signify that we had all returned safely, showered and returned to the visitors reception for some much needed tea and refreshments.

Safety of the mine and all who work at the plant is paramount; the company has invested millions of pounds in equipment and plant to improve the working conditions.
Without doubt, a lot of investment has been committed to ensure its efficiency. It's a big gamble but, while commodity prices remain high, it is well worth all the effort.

Most, if not all, of the rock salt is sold to UK markets, mainly in the form of road salt, whilst the potash is processed to provide the much needed fertiliser products for both the agriculture and amenity markets. In essence, the actual cost of a bag of fertiliser is incomparable to the costs associated with mining.

So, when you next put a bag of fertiliser on your sports facility, spare a thought for all the miners and engineers who have spent years perfecting the technology of mining minerals.

It was without doubt a very rare and rewarding experience going down the Boulby Mine. I would like to thank Everris and Neil from Cleveland Potash for inviting me and my fellow journalists. I hope that my article helps readers to understand the complexities and huge investment made by these companies to bring such a product to market.