Why is it that golf courses, and golfers, attracts such bad press? What makes intelligent people go off on ill-informed, high profile diatribes about a sport they often, clearly, know nothing about?

In a recent edition of BIGGA's Greenkeeper International, editor Scott MacCallum had a fair old rant about actress Miranda Richardson, her of Blackadder's Queenie fame, after she stated that golf courses depress her.

Hardly an edition of the BBC's Top Gear passes without some reference to golf, usually via the size of a car's boot being "too small to fit the golf clubs in, which can't be a bad thing" Jeremy Clarkson comment.

Recently the Daily Telegraph got on its high horse proclaiming that golf is "ruining our green and pleasant land". Where did they get this theme from? English Heritage apparently who, according to the Telegraph, claim that golf courses are doing irreversible damage to our heritage. The Telegraph goes on to cite a couple of examples: Rudding Park near Harrogate and Brocket Hall in Hertfordshire.

Rudding Park is, apparently, "a case of over-intensive development", whilst Brocket Hall is "an alien landscape" Well, let's take a closer look at those two examples.

Rudding Park is, in Stately Home years, quite young. It was completed in the early 19th century and was the home of Sir Joseph Radcliffe, a Baronet from Lancashire. Over the years the house fell in to disrepair and was saved by the Mackaness family who bought the house and 2,000 acre estate in 1972. Their immediate investment was the restoration of the house, the upgrade of agricultural land and the upkeep of the traditional estate properties. All worthy intentions, I'm sure you All this restoration had to be paid for and, in 1973, the blueprint for the leisure developments was implemented with the opening of a holiday park. In 1987 the house was opened as a conference centre followed by the completion of the golf course in 1995. The fifty bedroom hotel was completed in 1997.

But let's return to the golf course, the target of the Telegraph's angst. Of the 2,000 acre estate the 18 hole course and 6 hole short course cover an area of approximately 200 acres. The rest is mature woodland, parkland and agricultural land that is maintained in an environmentally friendly way. What the golf course, hotel and conference facilities allow, is the finances to achieve this.

Of that 200 acres only half is manicured turf, the remainder is, again, maintained for the environment. The Hawtree designed courses retain all natural features, such as mature trees, with the addition of water features attracting further flora and fauna.

Brocket Hall is one of England's finest stately homes and has long been the playground of the rich and famous. It is set in 543 acres of stunning parkland. Previous owners have included William Lamb, 2nd Viscount Melbourne, who served as Prime Minister of the United Kingdom from 1835-1841, and Lord Palmerston, Prime Minister from 1859 to 1865, whose death at Brocket that year 'involved a chambermaid!' Visitors to the estate have included Queen Victoria and Lord Byron and it is where the infamous Lady Caroline Lamb introduce the waltz to England in the ballroom. More recently, Margaret Thatcher wrote her memoirs whilst a resident.

The current 'owner' of the hall is television presenter Charlie Brocket or, if you're posh, Charles Ronald George Nall-Cain, 3rd Baron Brocket. Yes, him of I'm a Celebrity ... Get Me Out of Here! where he finished fourth in the 2004 version. He owns the house through a trust which leases it to a German consortium.

So what has this got to do with golf? Well, it's a similar scenario to Rudding Park. When Charlie inherited the house thirty years ago from his father, it was in a bad state of repair. Brocket Hall has many important paintings and antiques as well as being architecturally stunning.

To be able to afford the upkeep of these vital treasure the hall was converted into a hotel and conference centre and two 18 hole championship golf courses were added, the Donald Steel designed Palmerston and the Melbourne, created by Peter Alliss and Clive Clark. It is also home to the first and only Faldo Golf Institute in Europe.

Unlike Rudding Park, the parkland has been turned over pretty much exclusively to the sport. But is that a bad thing, as the Telegraph suggest?

The River Lea runs through the park and, along with 'Broadwater', a lake feature in front of the main house, creates all the water hazards. There is even a ferry to take golfers across the Broadwater to the 18th on the Melbourne course. In addition, the courses are home to rare Hornbeam, Scots and Corsican pine and 300 year oak trees, all of which are nurtured by the Brocket Hall staff.

Both courses have been sensitively designed around the local landscape and all areas of the parkland are maintained with the environment a high priority.
Similarly, it is the income from the hotel, conference centre and golf courses that allow the house and grounds to be preserved for the future.

So, how and why do these two fine examples of heritage preservation get cited as exhibits A and B in the prosecution's defence? Quite simply because the media have little or no idea how a modern golf course is maintained for the betterment of the environment or, indeed, the health benefits to the golfer, the latter of which reduces the weight of burden on the NHS, another of the media's pet hobbyhorses.

Golf is an easy target for the media. They perceive it as an elitist sport for fat men in large cars, with money to burn. They mock the clothes that golfers wear (through their 1970s eyes) and they see the large tracts of land as being scars on the landscape without seeing the bigger picture or, more importantly, knowing the facts.

As a golfer myself I know that walking five miles each round I play is doing me more good than harm. I delight at seeing the return of buzzards to my course, the deer running across the fairway. The bluebells in the surrounding woods in May are a wondeful sight to behold and autumn brings such stunning colours that is is impossible not be inspired by Mother Nature. I am happy in the company of my friends and can feel the pressures of the working week lighten with every step I take on the manicured turf (okay, the rough!). per and his staff are always welcoming. Their working regimes are reducing chemical inputs and the use of water on the course. New machinery facilities ensure that each machine is working to its optimum performance and washdown areas recycle waste water.

My home course is a twelve year old parkland course. The estate that own the land were once heavily reliant on farming and forestry but, with the decline in agriculture in the 1980s and 1990s, they sought ways to raise extra income to ensure their own survival and those of the estate workers. And so, the golf course was born as part of their overall business plan.

They took a tired, overgrown, ancient parkland and created a course that sits in perfect harmony with its environment. All woodland areas are now managed as part of the overall working programme, hundreds of new trees have been planted and the diversity of flora and fauna is increasing. The work was carried out under the watchful eye of English Heritage who still have a say in all developments on the course.

If I play golf just twice a week each round costs me £5.96. No more expensive than hiring a squash or tennis court for an hour, or paying subs to play cricket or football. So it's hardly elitist.And, quite frankly, is there a better alternative? Do the media offer any solutions?

Would they wish to see Stately Homes fall into disrepair, to see ancient parkland become overgrown and unmanageable, with no public access to view them in all their glory? How do they expect landowners to pay for their upkeep? Would they prefer to see Stately Homes go the way of Alton Towers, Longleat or Beaulieu? Do they really want another LegoLand? Surely golf courses represent a more environmentally friendly way to manage the landscape than a safari park, motor museum of adventure playground?

And, no, that's not a criticism of these types of attractions. Their respective owners found their own solutions to raise income to maintain their own little piece of our heritage. Just as an aside, I happen to think that Longleat would make a superb venue for a golf course. There would certainly be some interesting hazards!

Of course, the doubters will always view golf courses as scarring valuable tracts of land, spreading chemicals far and wide and generally ruining the environment. And golfers will continue to dress up in lurid clothes, at least in the minds of the media.

Did English Heritage really say that golf is ruining our green and pleasant land? Of course not. Five years ago they even cited Rudding Park in a case study of "Good golf course design in historic landscapes". They do suggest that "poorly designed golf courses that do not try enough to blend into the existing historic features are a problem" and, I doubt that many of us would argue with that comment. Sadly, it just wouldn't be a sensationalist enough headline for the media and, as the old adage goes, never let the truth get in the way of a good story!

The writer of the Telegraph article, Patrick Sawyer, also details other sites in great peril such as Birkrigg Stone Circle in Cumbria, which dates from between 1700 and 1400BC. Known as the Druid's Circle, it overlooks Morecambe Bay. The thirty-one stones are under threat from encroaching bracken and paint-spraying vandals. Also at risk is the Salcombe Cannon Site in Devon, where a shipwreck yielded a treasure trove of gold coins now held at the British 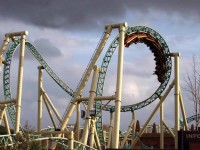 Museum. Last year the site was severely damaged by a fishing vessel. Thanks Patrick, but what on earth does that have to do with golf courses? I really don't think I'm going to find a trawler on the 7th fairway of my home course!

English Heritage do a fine job of preserving our national treasures. They may, on occasions, appear to be over zealous but, without them, and their allies the National Trust, Scottish Natural Heritage and the like, the United Kingdom would be a much poorer place. Misquoting them, and indeed, ignoring essential facts, does not help their cause, or in this instance, the image of golf.

If the media want to champion an issue in sport they could do worse than look at the disappearance of sportsfields for redevelopment and campaign to make sport more accessible to everyone. But, perhaps, that would be too much like hard work, especially when the soft target of golf is always there to take a pop at!