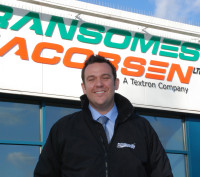 Golf and Turf Machinery, the Ransomes Jacobsen dealer for Yorkshire, has appointed a well known figure from the turf industry as Sales Director. Steve Nixon, the former Sales Manager at Bernhard & Co, joins Glen Sawyer and John Passfield on the board at the Mexborough-based company.

He will be responsible for the sales operation across the company's recently expanded territory, with particular focus on new business generation in the golf sector.

During his career at Bernhard's he spent three years at the company's facility in southern Florida and six years as UK and Ireland Sales Manager. Prior to this he spent seven years in the golf industry as greenkeeper/mechanic at golf clubs in South Yorkshire.

Commenting on his appointment, Glen Sawyer said, "Steve has a great understanding of the golf market, both here in the UK and across the Atlantic in the USA. He is able to communicate at all levels and his people skills will certainly be an advantage in his new role. He will be a great asset to the business, especially as we develop in our extended territory in North Yorkshire."

Steve lives in Barnsley, South Yorkshire with his wife Michelle and their two children, Matthew and Emma-Louise.