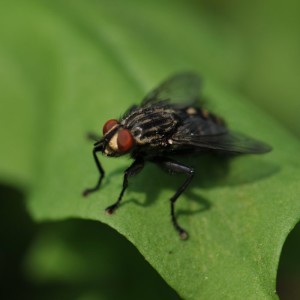 A Herefordshire golf club has issued a warning to golfers about one of the most common insects in the UK after a man lost his memory following a bite.

The blackfly, also known as the Blandford fly among other names, is prevalent in the UK and recently a man in Herefordshire was bitten by one and then developed encephalitis and lost his long-term memory.

In response, Burghill Valley Golf Club has sent out an email to make all golfers aware of the implications of playing golf in shorts and short trousers - especially during May and June.

According to the Hereford Times, the email said: "The effects of being bitten by a Blandford fly can result in serious swelling of legs, and if you are allergic to the flies, can result in stomach cramps, inability to stomach food or water which will then result in a visit to A&E.

"Blandford fly bites are usually most common during May and June. They often occur on the legs and are very painful. They can produce a severe, localised reaction around the area of the bite."

The insect mainly bites humans during those two months, and often near rivers or streams.

Bites usually clear up within several hours, but if the area around the bite becomes swollen seek medical advice, states the article in the newspaper.

Other symptoms include blistering, a high temperature and joint pain.

The email from the golf club recommends cleaning any bites with soap and water, and then using creams that contain camomile lotion, steroid cream or anaesthetic.

To deter fly bites, sprays are available from chemists.

The tiny bug used to be found only in streams in rural southern England but in recent years has moved all across the UK.

They are particularly active during periods of warm and wet weather, have a preference for human blood and usually target legs and ankles.

In 2010 Ian Poulter pulled out of the French Open when a blackfly bite on his shin became infected.

If you would like to view the original article plase visit HERE.