0 Ashton on Mersey GC set on having best greens 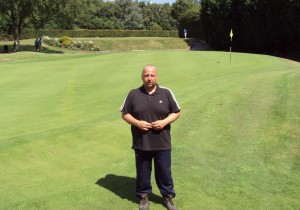 A focus on improving greens has won over members at Ashton on Mersey Golf Club who saw the end game was worth the minor disruption.

All greens at the nine-hole course have benefitted from being overseeded with British Seed Houses' Avalon and Vesper bents and major work has been carried out at the fourth hole to transform it from the worst to the best.

The result has justified Head Greenkeeper John Stepney's belief that quality greens are the most important priority to attract and retain members.

The project at the fourth hole was carried out in-house for under £6,000 including materials, 400 metres of drainage, a total reconstruction of all bunkering and adding moundings. It has been such a success that members have asked what the next improvement scheme will be.

John, who has been advised by Paul Moreton of British Seed Houses for five to six years, was always confident it was the right approach and kept members informed to minimise any concerns.

Indeed he plans a talk to members later in the year about his role and has invited Paul along too so he can also pass on his technical know-how.

John explained: "With the economic challenges facing every golf club the temptation is to cut back on investment, but we've always thought that was the wrong thing to do.

We have successfully changed a really poor green which has gone from being the worst to the best in the space of eight months.

"We put drainage in and at the same time re-shaped bunkers and carried out a lot of earth works. We changed the composition of the green with the velvet bents which now make up 60% of the green.

Our target is more than 70% bent grasses. I think we can possibly go higher because the conditions are so favourable and the annual meadow grass hates it. It is a real success story.

"The green has a healthy sward which is better for speed and playability and is disease resistant. It no longer suffers from waterlogging in the winter. We have no disease, no fusarium and no problems with wet grass. We are lightly dressing and continue to overseed."

The positive feedback from members has heartened John, who has been at the course for twenty years.

"People have been so impressed with the difference in the green that they want to know which one we are doing next. It has really changed attitudes at the club. As long as changes are explained and costed we can take the membership with us.

"We have to manage our budgets carefully but we would like to transform another green.

If we put good drainage in, tackle the sward composition and keep going with velvet bents it makes our job easier because there are so few problems and the grass does not require as much water and feed. Ultimately our members are playing on superb surfaces.

"The velvet bents are a brilliant product to work with. I am a real convert. It is a sustainable and long-term solution rather than a quick fix."

Ashton on Mersey is one of 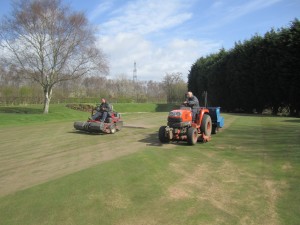 seven golf courses in the Mersey Valley so there is keen competition for business.

"We have to be on top of our game. We have to look at how we can become the best we can be that is why I made the decision to put more energy into our greens because that is where the difference is, that is what people really look at before they decide where to join and play," John added.

John usually overseeds in late April but this year he seeded in mid March and saw good results despite the below-average temperatures. After heavily verticutting John uses a drop spreader to apply seed evenly, top dresses and lightly brushes it in.

The dressing is kept wet until germination and then the absolute minimum is done to the greens for as long as possible to give seedlings the best chance of establishing.

Paul Moreton, area technical sales representative, from British Seed Houses, said: "It has been a pleasure to see the transformation which John and his team have carried out.

Their goal is to have the best greens in the area, not only fast from the golfers' point of view but also meeting the greenkeeper's requirements so he can manipulate the surfaces to suit the seasonal demands without ruining the sward.

"In my experience the overseeding method that John uses is the most commonly undertaken.

Tow behind drills are very accurate and time saving but many greenkeepers still prefer this method even when they have the means to purchase a seeder.

Manually sowing seed gives a look of more 'natural' establishment and negates any issues of seed lines or spots that can give the golfer the perception of 'ball tracking' or bumpiness.

"Overseeding with the Avalon and Vesper velvet bents has produced fantastic results in a short period of time.

This is one of the benefits of using an 'aggressive' species of grass. If you have surfaces that are in need of improvement why not select a species that can transform a sward composition in a matter of months rather than years?

It is not surprising that the members have been willing to accept some minor disruptions to the course when the end results are so convincing."