by External source
in Industry News, Conservation & Ecology, and Golf
on 03 Mar 2015

0 Golf course greenkeeper delighted to be a finalist

A man who has worked for 24 years at a golf club near Potton was named as a finalist at the Golf Environment Awards. 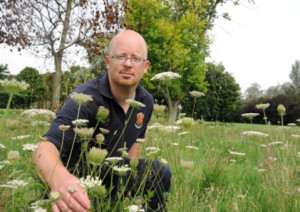 Steve Thompson who works at the John O'Gaunt Golf Club was nominated as Conservation Greenkeeper of the Year along with three others across the country.

Although unsuccessful in coming away with the award at the ceremony which was recently held in Harrogate he says it was a great honour to even be considered for the prize.

Steve said: "It meant a lot to be a finalist. After all these years it was great to be recognised for all of the hard work I have done.

"I was absolutely chuffed when I heard the news."

Steve is in charge of all the greens on the course and tries to overcome all of the ecology and conservation issues which may arise.

The nomination at the national awards comes after being recognised by the Campaign for the Protection of Rural England last October.

That award was in recognition of the improvements in the Biodiversity and Landscape that were reached by the hard work and dedication of him and his team.

The judges were particularly impressed by the Operation Pollinator areas on the golf course.

The operation is an international biodiversity scheme to boost the number of pollinating insects on a golf course.

It works by creating specific habitats, tailored to local conditions and native insects.

Golf course managers and ecologists across Europe and the USA are provided with targeted seed mixtures, along with innovative pesticide use practices and agronomic advice designed to benefit pollinators.

Steve said: "When I left school I volunteered and did some training at the RSPB over in Sandy.

"I then did a year over here at the golf club and 24 years later I haven't looked back!"

As well as maintaining the course Steve keeps regular lists of all wildlife on the course, which includes approximately 100 species of birds.