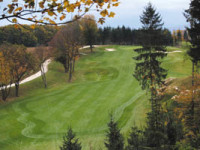 One of Slovenia's newest golf courses was designed by Englishman Howard Swan. Gorazd Nastran reports on progress at the course

The history of golf in Slovenia goes back to 1937 when the first course was opened near the town of Bled. Today, there are still only twelve courses catering for around 5,000 golfers.

The twelve courses consist of five 18 hole, five 9 hole and two practice/pitch and putt facilities of six and four holes. In addition there are other practice facilities dispersed across the country. There is one new 18 holesgolf course under construction, Golf Course Smlednik, which is scheduled to be opened in October of this year. Three additional projects are programmed to start later in the year.

One of the latest developments is Golf Course Otocec. The architect is the English designer, Howard Swan, who is working closely with Slovenian golf architect Peter Skofic. Between them they are trying to create one of the finest golf courses in Europe. The first nine holes were completed and opened for play in 2006. Construction continues on the second nine holes and it is estimated that all 18 holes will be open in spring 2009. The course is only available for play from March through to November.

The construction costs so far are in excess of 3 million euros; this does not include the purchase of the land. The course is situated 70 km sou

th east of the Slovenian capital Ljubljana. The highest construction standards were employed with a quality constructed subsurface and surface drainage to ensure long-term maintenance was as straightforward as possible.

The Head Greenkeeper is Blaz Gutman who, with a team of five, looks after the current nine hole facility. Blaz is an agriculture engineer who has adapted his skills to meet the needs of the course. He was employed right at the start of the construction phase and has picked up many skills along the way.

The greens were seeded with a mixture of A4 and L93. So far, they are quite satisfied with the quality of the greens. Cutting heights vary from 3-4mm in the main growing season and up to 4-5mm during the winter period. The course suffered from a severe attack of dollar spot in autumn 2006 but, for the past year and a half, they have had no particular troubles. Tees are cut at 10mm and fairways at 19mm. During the winter the staff start work at 7.00am, but through the open playing season maintenance starts at 6.00am and 5.00am on tournament days.

Blaz's fertilising regime is determined by his soil analysis. It is then formulated into a monthly programme based on a low nitrogen input. One of his main objectives this year will be thatch control, combining hollow coring and deep verticutting with regular light topdressing. 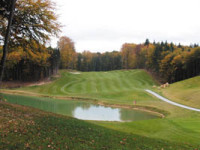 Machinery selection is based on what is available in the Slovenian market. Ransomes Jacobsen has the longest presence in in the country and they provide the bulk of the machinery used on the course along with service and spare parts.

For greens and tees Blaz and his team use four Jacobsen Greensking walk behind mowers. The fairways are cut with a Jacobsen Fairway 305 and for semi rough a Jacobsen AR 250. There are currently 32 bunkers on the course and these are maintained with a Smithco bunker rake.

Other machines at the course include a Cushman fitted with a sprayer, Ryan aerator, Wiedenmann aerator, two Turfco topdressers (one each for greens and fairways) and a Carraro 60hp tractor and trailer. It seems Blaz and his staff are achieving their objective, as the course has been voted the 'best golf course in Slovenia', by the Slovenian Golf Course Owners Association.