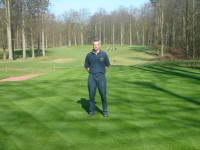 Balancing the need for a fine-leafed appearance with strong wear tolerance is no mean feat when it comes to golf tees grass cover selection. But Forest Pines Golf Club in north Lincolnshire has found a solution that combines just those qualities, thanks to turf grower County Turf and specialist grass seed breeder Barenbrug.

David Norton, golf courses manager for QHotels, which owns the club, has always sought the finest appearance possible from turf for his tees. And, with Forest Pines in close proximity to its supplier County Turf, David would regularly visit the production field to view and select turf up to his exacting standards. But when the grower's Chris Medley said he'd produced an even finer turf - grown from Barenbrug cultivars - David was keen to check out the results.

He takes up the story: "I've always sought attractive, fine turf - as fine as possible, ideally. But we need something that can take the wear, too, as we're about as busy a golf club as you can get, with the course subject to a lot of wear. So, when Chris told me that he'd grown a finer turf, I went down there and just thought it looked wonderful. I was very keen to use it."

County Turf produced David's turf using a special 70 percent Barenbrug slender creeping red fescue and 30 percent Bargold perennial ryegrass mixture. The red fescue gives the finest-leafed appearance possible, but the secret ingredient is Bargold. This Barenbrug-bred cultivar is unique among perennial ryegrasses, in that it provides the wear tolerance but also grows slowly so as not to overpower the red fescue. The result is the perfect balance between a very fine appearance and a hard-wearing performance - characteristics that can be found in Barenbrug's BAR Medal grass seed mixture for seeding tees in-situ.

David re-turfed two championship tees and one full tees complex in late February and early March this year, and is pleased with the results. "We were back on the tees within the month," he continues. "It's performing well, it cut down to 10mm very quickly and generally looks very nice and fine. Obviously that's also down to the preparation and rootzone, but all in all feedback has been very positive. No one would know it's perennial ryegrass - as far as the golfers are concerned, it's fescue. If I re-do the tees again I wouldn't hesitate to reuse it."

For more information, call Barenbrug on 01359 272000 or email info@baruk.co.uk. Alternatively, visit www.barenbrug.co.uk where you can also search for turf growers.