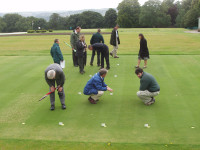 Barenbrug has received an enthusiastic response from a group of independent agronomists who recently visited the company's latest golf greens trial at the Sports Turf Research Institute (STRI).

All species that are currently or have the potential to be used on golf greens, either as single cultivars or mixtures, have been included in the 12 groups under trial.

The plots were sown in July last year and already the establishment phase has identified some significant differences in speed of establishment and disease incidence.

Barenbrug's UK research and development manager Jayne Leyland was encouraged by the feedback from the agronomists. "Overall we got a very positive response from the group and they commented on its real practical value.

"We organized the day to both inform and involve them in this work. It is vital that we replicate as realistic and practical trials as possible and they contributed important feedback as we enter the 'open for play' phase of maintenance. Their input as we continue the assessments, which will include aspects of playing performance, visual appearance, persistence and disease susceptibility, and maintenance programmes for the next 12 months will be invaluable."

The agronomists were provided with full details of the cutting regimes, nutrient and irrigation applications for both regimes, together with a breakdown of the temperature and rainfall at the trials site.

On completion of each phase of the golf greens trial the company will be publishing details as part of its FACTfile series of technical data files.