The good folk of beautiful Barra are a sturdy lot and when it comes to golf, they tend to display the hardy resolve you'd get with a cast iron rivet. "There's no such thing as a fair weather golfer on Barra," suggested Murdoch MacKinnon, the captain of the Hebridean island's golf club. "We are all weather golfers." 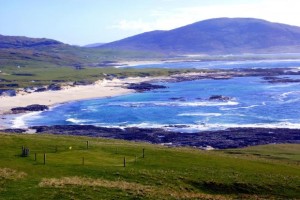 As the United Kingdom's most westerly course, Barra Golf Club regularly gets visited by the kind of fearsome meteorological mash-ups that would have the Four Horsemen of the Apocalypse hastily donning their sou'westers, cowering under a brolly and saying 'forget this lads, we'll give it another go when it eases off.'

The assaults from the Atlantic may be turbulent but then that's the price you pay for the enchanting visual splendour that greets the een in this part of the world. And those views can often be priceless anyway.

One thing the islanders can certainly put a price on, though, is a new clubhouse for their nine-hole course. About £30,000 should do the trick. You don't find that kind of sum down the back of a couch, of course, and in the absence of lottery funding, a come-all-ye appeal has been set up on the online donation site Crowdfunder.co.uk.

Carved out of the rugged grazing land where sheep and cows roam and electric fences surround the greens - "they're not quite like the greens at Augusta," said Murdoch - Barra Golf Club, which has been in operation since 1992, has become something of a site of pilgrimage for eager enthusiasts keen to sample this Royal & Ancient game in the raw and on the edge.

"The visitors thoroughly enjoy it and if they don't enjoy the golf they enjoy the views," added Murdoch. "We had around 300 visitors this year and at one event we got the shock of our lives when 66 entrants turned up. We had Americans, a Canadian, a couple of Swedes. One guy flew in from Finland on a helicopter. He heard it was the most westerly course in Scotland so he hopped over."

With 16 members paying a yearly subscription of £80, the Barra hardcore rely heavily on the honesty of those guests flinging £10 into the box ahead of teeing off to keep things ticking over financially. There is an intriguing, exhilarating experience to be had for your tenner but the locals are desperate for that experience to be bolstered by some much-needed, basic facilities. "Visitors may ask a member where the toilets are and the response tends to be 'well, have a look around you … anywhere'," admitted Marion MacNeil, who is part of the island's economic development programme. "It can often be a bit embarrassing."

Then again, it is the great outdoors but there is a serious side to this clubhouse crusade as those involved look to spend a bit more than a penny. "It would make a hell of a difference," stated Murdoch. "There's quite a big appetite for golf among the young ones on the island and we had a tie in with the school which led to 30 juniors coming up on a Tuesday and a Thursday. But folk would be more content to send their kids up there if there was a base for them and a shelter. These youngsters are the future of the club. If we don't get some kind of clubhouse built, I fear it will close and that would be a huge shame and a big loss to the island."

Murdoch is a Barra man through and through. "I lived on the mainland for 20 years but came back for a holiday 30 years ago and never left," he said. He quietly hints that his age is "about the 70 mark" - not much higher than his best score for 18 holes - and he is one of the many volunteers who put plenty of hard work and heart into a project that doesn't come cheaply but is bolstered by a good honest community spirit. A £4000 lawnmower was purchased with the takings from a couple of birling, twirling fund-raising ceilidhs. Not quite 'Strip the Willow', more 'Clip the Fairway'.

He added: "We need about £7-8000 a year to maintain the course. It's quite an outlay. We know raising around £30,000 will be quite difficult but we have a few joiners and brickies who are members and they would do a lot of the work on the clubhouse themselves. We did look at lottery funding. If we were looking at building something for £250,000 then it probably wouldn't be a problem. If you're only looking for a relatively small amount though it's a different matter. We are remaining quite positive. If we do get a go ahead it will safeguard the future of the place."

Now that would be priceless.

Pledges, great or small, can be made at www.crowdfunder.co.uk/isle-of-barra-golf-course.