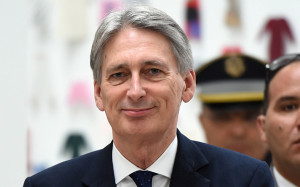 Philip Hammond, the Foreign Secretary, has waded into the row between members of one of Britain's most prestigious golf clubs and its new Chinese owners, accusing the Beijing-based conglomerate of "very disappointing" behaviour.

Mr Hammond's intervention will boost the hopes of Wentworth Club's golfers that he can succeed in forcing the new owners to backtrack in plans for a massive hike in fees and a drastic cull of members.

Mr Hammond, who is Wentworth's local MP, will need to use every inch of the diplomatic skills acquired during his tenure as Foreign Secretary.

Relations between Reignwood Group, which bought the club last year for £135 million, and its membership have sunk to an all-time low.
In a growing escalation in tensions, Wentworth's Chinese owners are being accused of a lack of respect after the St George's flag was lowered to half mast for victims of the Paris atrocity while the Chinese flag that also now stands outside the clubhouse was not.

Members' anger was provoked by an announcement by Reignwood last month that it plans to cut membership of the club from 4,000 to 800; charge a one-off debenture fee of £100,000; and raise annual membership rates. The members, who include Sir Michael Parkinson and Sir Bruce Forsyth, are - not surprisingly - furious. Nigel Moss, a Wentworth member for 26 years and leader of a campaign group against the changes, wrote to Mr Hammond urging him to intervene "in this deliberate destruction of our community".

In his response, Mr Hammond said: "Thank you for your recent email in which you express concern about proposals by the new owners of Wentworth Club, Reignwood Group, substantially to increase both the joining fee and the annual membership costs...

"I agree that this is very disappointing. Although Wentworth has always been a private club, it is very well-loved by the local community and has been treated very much as a social and community hub."

Mr Hammond, MP for Runnymede and Weybridge, said in his letter he would seek a meeting with the new owners "to convey the strong feelings locally in respect of these proposals" and added that he would further make it clear to Reignwood that it "may wish to bear in mind the need to engage and to maintain good relations with the local community if they wish to seek planning permissions in the future".

In the latest upset to members, Wentworth's English flag was lowered to half mast in the wake of the Paris attacks but the Chinese flag was not.

In his letter to Mr Hammond, Mr Moss wrote that "this callous act" in raising fees and cutting membership "is destroying a whole community, which has been thriving for many decades, changing it into an elitist preserve of a handful of ultra-high net worth individuals".