0 Golfers swing into action as Painswick targeted by vandals

Painswick Golf Club has been inundated with offers of help after its third hole was targeted by vandals. 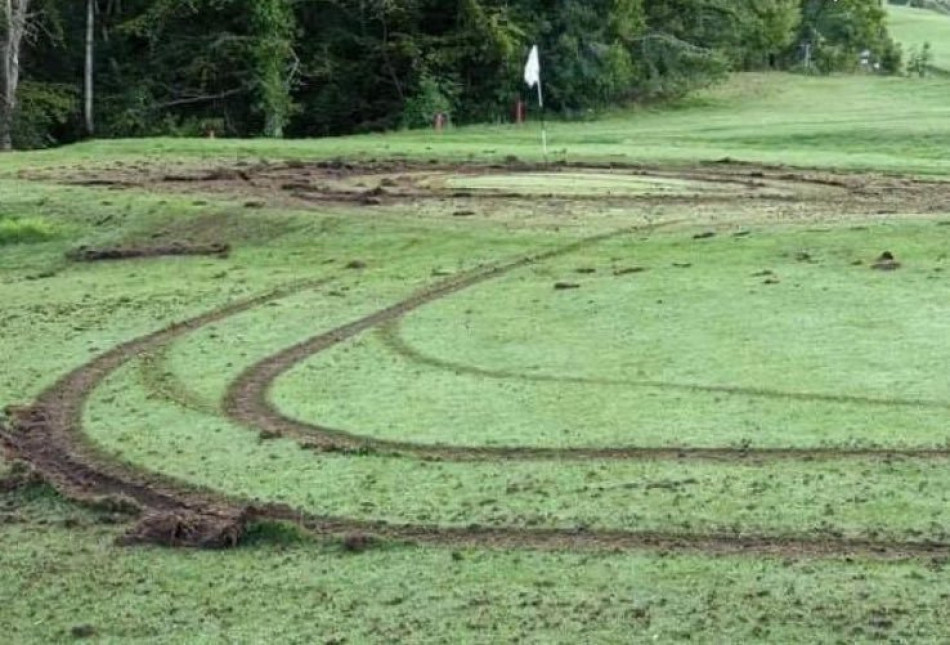 The damage in and around the third hole (Picture: Glos Police Specials/Twitter)

The hole was badly damaged by a vehicle being driven over the course and repairs are underway to enable this weekend's annual club competition to go ahead.

Club professional Mark Cottrell said: "We got in on Monday morning and discovered the third green, third fairway and third tee had been driven over and damaged. It's horrendous.

"Basically they have done doughnuts on the green around the flag and then out on the fairway. They stopped at the top of the hill around the tee so they've just targeted the one hole."

A road runs behind the third green, but Mr Cottrell said access is far from easy.

"The access to the golf course has been blocked off with metal poles and we've got boulders from the quarry which runs alongside the third hole," he said.

"There's high banks which they have come over and a car wouldn't be able to get in there so it is some form of off-road vehicle."

Since word of the discovery spread, the club has received a succession of offers to help.

"I've never known a response like it," said Mr Cottrell. "Local golf clubs have offered equipment, manpower and whatever help they could give.

"Greenkeepers from six or seven courses have been in touch with our head greenkeeper who has been out working with the club captain and members who volunteered to help out.

"It's been lovely to see that support."

The club is working to make the hole playable for the club championship but Mr Cottrell believes it will be a long job to repair fully.

"It will need attention for months," he said. "It's a case of letting nature take its course."

"Thankfully we have what we call the old 18th we can use to make the course up to 18 holes while the third is out of action."

The par three sixth hole at Painswick was described by golf writer and commentator Henry Longhurst as one of the best 18 holes in the world.

And golfers old and new have been flocking to find out why since lockdown restrictions enabled them to return to action at the start of July.

"It's been absolutely manic," said Mr Cottrell. "We've been four or five times busier than this time last year - it's such a shame that it has been abused like this."

"People seem to have realised the importance of getting out and about and being healthy."

"It's sort of kickstarted golf. There are a lot of beginners and revenues from visitors and new members have been exceptionally good."

You can read the original article from PUNCHL!NE HERE