0 Golfers vs Greenkeepers - who has priority? 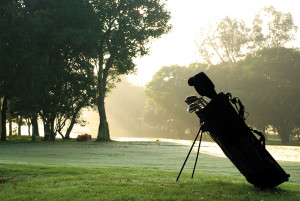 It's an age old question; who has priority out on the golf course, the greenkeepers going about their daily tasks or the golfers trying to enjoy their round? It's a topic that generates furious debate, both in the clubhouse and on social media

Most greenkeepers will be able to narrate at least one story of a golfer 'playing up' when they are trying to cut the green, of being hit by 'some idiot' who thinks it's their God given right to be allowed to play through, or an ensuing argument about right of passage.

So, who is right? There is no simple answer, but communication with the membership and the 'pay and players' is vital.

The bottom line is that greenkeepers are there to prepare the course each day for the golfers. That is their raison d'être, plain and simple.

During the spring, summer and early autumn months, greenkeepers will, or should, be out on the course ahead of the day's play, beginning at the first hole and progressing around it in numerical order. And, if clubs have an 'earliest tee time' arrangement that is a minimum of an hour and half after the greenkeepers have started their work, many of these altercations could be avoided.

As one course manager commented; "the greens staff should be well ahead of the golfers whilst carrying out morning course set up jobs, i.e. cutting, raking, hole changing etc. Start times should ensure that we always have an hour and a half to two hours head start on the first tee off time. If a golfer has teed off before the designated first tee time, then the greens staff have full right of way, it is the golfer who is then in the wrong."

He went on to say; "for any other non-priority jobs, then the greens staff should let the golfer play through, or move to another area of the course where it is less busy. Common sense should also be used by both parties though!"

Ah, common sense; something sadly lacking in this day and age or, as those wretched meerkats say, "simples". But we all know it is not that simple.

Where a golf club has a decent size team able to achieve the above, i.e. staying ahead of play, then incidences as described should be few and far between. But many of the smaller courses run with a skeleton crew, especially in these austere times, and simply don't have any other option but to be working out on the course during play.

Many of these smaller courses will also use volunteer members to rake bunkers or help out with conservation and winter projects, and that opens up another can of worms (sorry to mention worms!).

And, of course, during the winter months, there is very little option but for greenkeepers and golfers to co-exist.

A lot of golfers believe that they have paid good money to play and, therefore, have the right to play whenever they feel. It's an understandable viewpoint, but very misguided. They have probably paid good money for their car, but that does not give them the right to drive it where they choose, especially if it endangers others.

For most full-blooded golf shots, the ball will travel at speeds in excess of 100mph and, to be hit on the head by a wayward, or deliberate, Pro V1, can cause serious injury. Golfers surely must be aware of this fact, but some still refuse to believe they are responsible for a lethal missile and launch regardless.

It is also understandable that greenkeepers react furiously. "I got hit on the arm one day cutting the surrounds of greens. I picked up the ball and threw it into a gorse bush. The golfer approached me and asked why I did it? I replied by pointing out what damage he could have done and the arrogance he had shown," commented one greenkeeper.

In this instance, both parties were in the wrong, even if the golfer had instigated the confrontation. Clearly, the golfer should not have launched his ball in the direction of the greenkeeper yet, equally, the greenkeeper should have been aware that there was an idiot close by playing a shot! It takes a couple of seconds to look up, move aside, allow the shot to be played and then speak to the golfer calmly - without injury or loss of ball. 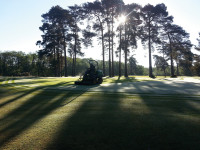 Of course, some of you will be thinking "why should I do that?" Again, simply, to defuse the situation. The workings of a golfer's mind would even perplex the brain of Prof. Brian Cox. Take this comment, for example: "The only thing that annoys me about greenkeepers on the course is that they go round in the same direction as the players. If they went against 'traffic', one would only encounter them for one hole. Sometimes they seem to be following me to every tee and green!" Or this one: "It is a golf course, golfers have right of way. Purely from a legal perspective, if the greenkeeper has right of way, then it would open the door to all sorts of potential suing. Same as pedestrians and cars."

That, in a nutshell, is what greenkeepers have to deal with on a regular basis. So, how can the problem be resolved? It has to start at the sharp end, with the club, committee and pro shop.

It is incumbent on the golf club, as your employers, to ensure your safety at all times, and this includes the behaviour of all those using the facilities, whether in the clubhouse or out on the course. The club could face serious consequences if they were found to be negligent when it came to providing safety information to golfers.

The pro shop staff should:

All the above should be communicated to golfers via the club website, notice board, newsletters, on course signage and in general conversation.

This need not be done in a heavy-handed way. Notices such as "please respect our greenkeepers, they are preparing the course for you", or perhaps "the greenkeepers are spraying on the course, please do not lick your balls" will get the message across to the majority.

And, of course, it goes without saying that interaction between yourselves and the members is vitally important. In the course of my work, I see very few club websites where a page is allocated to their greenkeepers. You should insist that you are able to have a voice in the members section to communicate your work, your plans for the future and, as required, your concerns.

I find it very puzzling that the majority of golfers would never play up intentionally to a fellow player because they understand the dangers of doing so, and the etiquette of golf, so why the hell do it to a greenkeeper?

Put simply, greenkeepers are going about their work and should not expect to be 'fired at' with lethal missiles!

I'll leave you with one final comment from a golfer; "What I do detest is the greenkeepers with tractors and mowers moving around when I'm about to hit my ball. This is when greenkeepers having priority is a definite no no."