0 Good grooming is the height of excellence 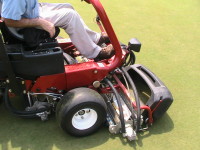 Well groomed greens are on every greenkeeper's wish list, providing the optimum playing surface for an increasingly discerning membership while promoting robust, healthy turf. The Advanced Turf Technology (ATT) TM SystemTM 'Ultragroomer' can provide exceptional results on high density fine turf grasses such as creeping bents, suggests ATT's John Coleman. "Bents are desirable for their tighter density which gives an excellent playing surface, but the downside is that this inevitably means increased production of organic material."

Traditionally, verticutting has been the solution to remove organic debris, but John suggests that the 10mm spacing of a verticut reel is more suited for older; less dense grasses and that developments to specialist golf green cultivars have outpaced traditional maintenance machine technology. The situation is exacerbated by lower heights of cut which can further increase density.

Verticutting, John points out, is best suited to removing the build up of organic matter rather than preventing it, and the sward can soon get tight and puffy, leading to thatch development. It is during this 'puffy' phase that the green surface 'footprints'. Cutting at low heights of cut when greens are in this state will also result in scalping, further stressing the plant.

"The sward is also subjected to considerable stress by aggressive verticutting, which can weaken it. After a week or so it comes back and is fine for another week, but then you have to start the whole process again. It is hard to provide a consistent playing surface under those circumstances," he says. 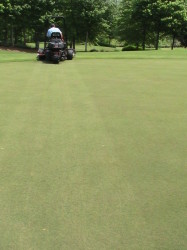 Treatment with the Ultragroomer every week to 10 days minimises the phased management effect, using thin tipped blades at 5mm spacings. "More blade surface area is in contact with the turf, and it is working at a shallower depth, so stress on the plant is reduced," John explains. "It can prevent excessive organic material developing, making for a more consistent green over the course of the season."

There are other benefits too - it can be difficult to get sand dressings into the tight sward of bent, but the Ultragroomer makes 'space' for the sand, which John suggests should be applied in a light dusting after grooming and before a pass with a vibratory roller, also available as part of the ATT TM SystemTM.

Poa annua is a major headache for greenkeepers, who maintain bent grass swards, and the Ultragroomer helps to control it by grabbing and pulling out the seedheads, minimising seeding. It can also take out Poa plants by their shallow roots, while leaving the finer rooted Bents intact. "Integration of Poa into creeping bents can be significantly limited with the Ultragroomer," comments John.

"It also works well in the management of bents themselves - while Gibberelic acid inhibitor growth regulators are useful to encourage lateral growth, they can lead to too much density, so the Ultragroomer can be employed alongside them to manipulate density to the required degree. It is more effective than verticutting for this purpose."

Greenkeepers can also use the Ultragroomer to control grain, either on sloping greens or where shade encourages the grasses to grow in the direction of the light. "We have several customers who work at a slower forward speed and push against the direction of growth before travelling around the green to keep on top of grain, and it is very effective," John says. He warns that the Ultragroomer must be well maintained to give the best possible results. "If the blades have rounded tips they risk bruising the plant, leading to disease ingress, so they do need replacing every couple of seasons."

John Coleman adds that the Ultragroomer is a key part of a complete regime of good surface management. "Keep on top of nutrition and growth regulators, plus regular use of the UItragroomer for the best possible results on bents," he says.

Seed breeders are also seeing the benefit of the technique. Regular grooming helps the greenkeeper to achieve the best possible playing surface without resorting to close mowing, suggests British Seed Houses' Richard Brown. "By standing the sward up for the mower blades, it is possible to get a cleaner, accurate cut which gives a smoother, more level playing surface," he explains. "The greenkeeper can look to create his desired green speeds with a 4mm cut, rather than mowing down to lower and lower cutting heights to achieve the same objective."

Richard comments that removing thatch with a groomer also gives a healthier environment for turf growth, allowing air into the sward and further helping guard against disease. "This is enhanced by the longer cut, which minimises stress and allows for more leaf area for optimum photosynthesis and thus a healthy sward. Cutting stress to the grass plant is best practice for the maintenance of healthy turf, and has the added benefit of making the greenkeeper's job a whole lot easier."