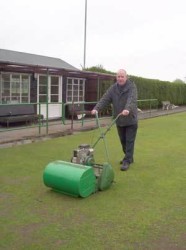 David Bull who has worked at the factory for 21 years is the current bowls club chairman. David wears many hats as he is also the treasurer, a player and during the last six years has been responsible for maintaining the green in the capacity of grounds man. He carries out the regular maintenance works, mowing, watering, feeding and brushing the green. David usually enlists the help of Brian Grantham, a landscape contractor to help with the end of season renovation works, as Brian is involved in the maintenance of the football pitches and other areas of landscape around the site.

The crown green was constructed back in the 1960's and has an old clay pipe herringbone drainage system installed which still works reasonably well today. David confirmed that the green drains very well, having very few games called off during wet weather. The club currently boast about 40 playing members fielding five teams who train and play on the green, with most matches being played on Saturdays and Sundays. Practice and evening matches are played midweek. The season starts in mid March with matches played through to September. The green has to accommodate well over 90 matches per season.

David has a very limited budget (approximately £500) for maintenance and sees his primary role of mowing and preparing the green for matches. He cuts the green using an old Auto Certes mower, maintaining a cutting height of 4mm through the season. He likes to keep the grass at a longer length to prevent drying out during summer months. David tries to keep the surface clean and free from disease by regular brushing and aerating using a sarrel roller. Irrigation of the green is by hosepipe and sprinklers.

David applies spring and summer fertilisers during the season, mainly to promote early season growth and then to maintain colour and appearance. At the end of the season, David hires a scarifier and aerator to complete the autumn renovation works followed by over seeding. Every other year he hollow tines and topdresses with a 70 /30 rootzone material to restore levels.

David has no formal qualifications in greenkeeping but has picked up experience and relevant knowledge from Brian and from talking to fellow bowling clubs. His current concerns with the green are bare areas and rabbit damage. Trying to get seed to establish once the playing season is underway often proves difficult. The rabbit problem is a bit easier to overcome, ensuring that the rabbit proof fencing is secure and that the main gates at the entrance to the green remain shut. But all the hard work and effort is rewarded when so many people enjoy themselves at the weekends.

The rest of the site comprises two full size football pitches and a small five aside pitch, all very well maintained by Brian Grantham, a locally employed contractor. The combination of natural free draining pitches coupled with the caring efforts of Brian and his team have produced quality pitches that are the envy of many local clubs. In fact the pitches for the time of the year (April) looked magnificent with very little wear seen in either centre circle or goalmouth areas.

As for the long term, the future of the bowls club and sports fields at Goodrich is unclear. There has often been talk of the factory trying to sell off its land assets but, luckily, these wonderful facilities are still available for use for now, providing much needed recreation for well over 150 staff at the weekends.