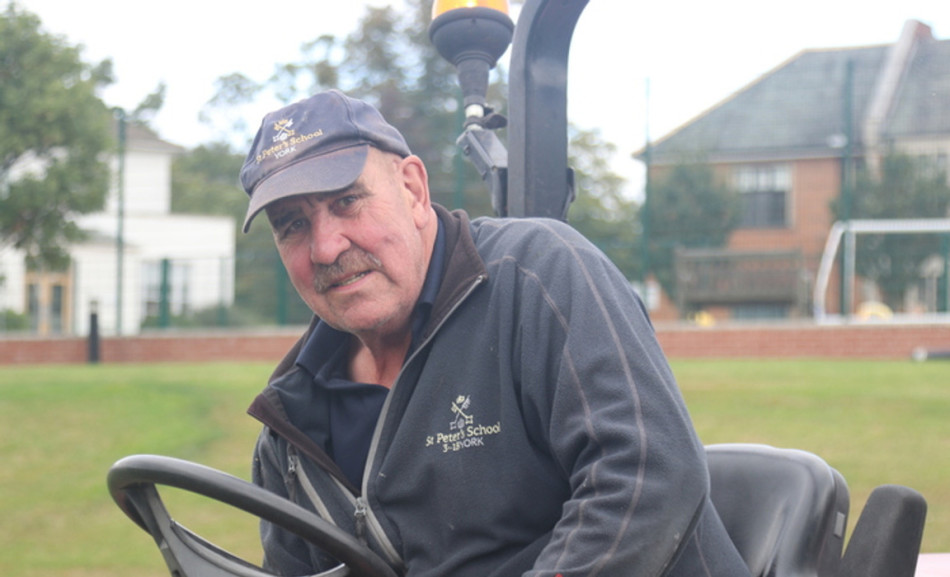 Teaching and support staff gathered in the Dining Room to say farewell to Gordon on Thursday 30 September and Mr Walker, Head Master at St Peter's School, delivered a speech in honour of Gordon's retirement:

"Gordon first worked at St Peter's from 24/6/1985 - 11/4/1987 as a member of the grounds staff. He left for 5 months to go back to butchery, but as Gordon says "I wasn't cut out for it". He then returned to work at St Peter's from 14/9/1987 initially as a General Labourer, and member of the grounds team and more recently as a Groundsman. This marks an incredible length of service - well over 30 years. During that time, he has become hard working, trusted and truly valued.

"He also has some favourite sayings:

The infamous… "But it just fell off!"

"I don't do cricket"

"As you might expect after such a long period of service, there have been some amusing moments. Just recently the lights on the trailer have been playing up. On returning back to the yard, there was Gordon on hands and knees, screwdriver in hand with all the lens and bulbs spread all over the yard. "It won't work" he shouted to Mark across the yard "I don't know what's wrong with it. Been messing with it for ages". Mark went over to him walking down the side of the van. As he reached the rear of the van Mark glanced down to see that Gordon had not plugged in the 7 pin connector from the trailer into the van - hence no electric for the lights to work which I am told led to a lot of laughter.

"Some years ago, I am told that Gordon went on a course to assess his skills towing a trailer (which he passed with flying colours). He was asked whether he wore glasses and whether he was told he should wear them for driving. He answered that he does have glasses for driving and that he always wears them when he goes on long journeys as he was told by the optician that they were "long-distance glasses"! He was instructed to always wear his glasses for driving from then on…

"Gordon is noted for …

His not so straight mowing lines

His dislike of training courses

"Gordon is liked and valued not just by his colleagues but also by pupils, parents and visitors to the school. Along with other members of support staff, Gordon is one of the first faces parents see when coming to school in the morning. Not so long ago, Gordon saw a mother bringing her child to school for the first time. It was raining heavily, and she was struggling with one child on her hip, another in a buggy and holding the hand of a third child while juggling associated bags. Across came Gordon, like a modern-day knight in St Peter's blue uniform, to hold an umbrella over them and escort them to the door of St Peter's 2-8. What a courteous, gentlemanly action and when that parent heard of Gordon's retirement she invited him to come and have breakfast with the family before he finished. A lovely story and something I am sure they and Gordon will long remember.

"He has always been on time, happy to work alone carrying out some of the less desirable tasks such as hole digging, de-icing at 6.30am, slab laying (some very heavy ones) and mowing of all the pitches in the summer months not to mention organising the tip runs and sorting the waste.

"We plan to keep him on to sort out the scrap & tip runs one day a week so we won't miss him that much when he retires!

"Gordon - thank you for all you have done for St Peter's, stay in touch and we all wish a long and happy retirement."