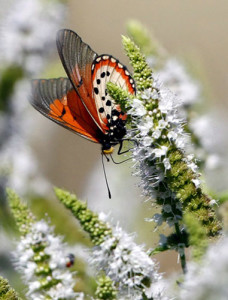 Government called to act over wildlife decline Conservation groups urge PM to take 'urgent action' after a report revealed half of Britain's wildlife is in decline.

THE State of Nature report, launched at the end of May by Sir David Attenborough, revealed sixty percent of UK wildlife species were at risk. The RSPB and The Wildlife Trusts are joining forces with eleven other organisations to send open letters to all the party leader surging them to take 'positive action for nature' .

The letter said: "The report indicates that a shocking number of the plants and animals for which we are all responsible are in serious trouble.Where nature was once common, now we have to seek it out.

""The people of the United Kingdom have a deep affinity with nature. We ask you to join us in harnessing this by sending a clear signal of your support in the vital task of conserving nature and understanding it better, for the benefit of this and future generations.

The organisations, which include Bug life and the Marine Conservation Society are asking David Cameron, Nick Clegg and Ed Miliband to commit to funding wildlife schemes, tackling the environmental crisis through all areas of government spending and 'embarking on an ambitious programme of research and assessment into species declines .

RSPB chief executive Mike Clarke said: "This report could not have come at a more crucial time. The Government is about to decide where to make cuts in its budgets as part of the upcoming Comprehensive Spending Review. Funding for wildlife friendly farming, for example, is under threat."

"But, in the longer term, there are a lot more tough decisions to be made. This report reveals that more than one in ten UK specie sis threatened with extinction the current level of ambition and investment in our environment is simply not enough to tackle this."

Mr Clarke said political leaders must "take heed of the robust science" presented in the report and "ensure that we do not sleepwalk towards an environmental cliff edge".

He added: "Millions of people support nature conservation groups, and they will not stand for inaction and platitudes - the time for action is now."