by Mark Sanderson
in Industry News, Chemicals & Fertilisers, and Golf
on 08 Apr 2014 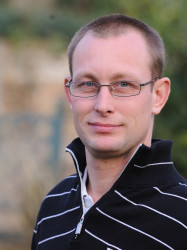 Although the Müeller Track-Guide is designed primarily as a tractor-steerage guidance platform in agriculture, it is the linkage of to his Team Sprayer's controls that has been the breakthrough for Andy. Now he has accurately mapped the perimeters, all the course's greens, fairways and tees, so that the sprayer automatically switches on and off to only treat the designated areas.

Furthermore, as the required area is sprayed, it is tracked on the display screen map and, if the boom passes over an area that has already been treated, the respective nozzles are automatically switched off - avoiding wasteful over-spraying. The screen display also shows any area that may have been inadvertently missed, enabling the operator to automatically fill in any gaps and assure complete coverage.

Andy highlighted that, before the course was accurately mapped in setting up the system for the first time, they had worked on the application area of a 1.2 hectares for greens and 10 hectares of fairway, which was fairly typical for most courses. In fact, they discovered the actual area was 1 hectare of greens and 9 hectares of fairways.

"In the past, we may have been over-dosing some areas by 10% or more and overspraying surrounds that didn't need treatment, which was wasteful. It has already brought us cost savings by being more accurate. And under-dosing or missing patches during application would have meant reduced efficacy or increased risk of disease," he advised. "Either way, knowing exactly what we have treated ensures we use the optimum inputs in the most efficacious way."

Having pre-programmed the computer for the required application rate per hectare, the sprayer's forward speed is constantly tracked and the physical nozzle output constantly adjusted to maintain the correct application. The system automatically alerts the operator if any issue arises that might affect accuracy.

The technology has also eliminated the issue of over or under applying when starting off and completing spray runs, which can frequently lead to stripes or patches with fertiliser applications. Andy reports that, on irregular greens and variable width fairways, the system has proven an absolute godsend in avoiding overlaps and targeting sprays exactly where required.

Ely's six-metre Team sprayer is controlled by six sets of switch gear, each operating one-metre sections with two-nozzles. However, the technology is available to operate individual nozzles - up to 72 switches for a 36m boom! Importantly, the technology has eliminated the need for a costly signal base-station and gives greater flexibility to switch to other machines or uses in the future. The system has also brought about significant time savings. Sprayer operator and Deputy Head Greenkeeeper, Simon Winters, said all eighteen greens could now be treated in just an hour - half the time that it took in the past. The entire course can be sprayed in less than a day, resulting in less disruption for players and assuring proactive fungicide treatments or the Primo Maxx programme across the course can be completed at the optimum time.

Combined with the drift reducing Syngenta XC Nozzles fitted to the sprayer and used for virtually all applications, Andy reported they have been able to manage the weekly spray programme far more effectively in the available spray windows.

Simon pointed out that, if he is part way through spraying a fairway or green when golfers want to play through, he can simply stop and reverse out of the way; once they have moved on, he can resume and the sprayer automatically starts up precisely where he left off. If a fill is required part way through spraying a fairway, the machine remembers where it finished and restarts from the correct point.

The control box can be coupled to computer recording software and further refined with new software and downloadable apps to provide monitoring tools and practical assistance to the sprayer operator.

Andy acknowledges that the system can be disrupted by overhanging trees or physical barriers that block the GPS signal, but that they have encountered just three small black spots across the course, when the sprayer reverts to manual and then picks up the signal again when it is clear.

At around £5,000 for the complete GPS system, controller and a new six-metre boom fitted to the sprayer, Andy believes the benefits will soon recoup the cost. "We are now in full control of every application across the course. Some people may claim the technology has taken away some of the skill of the operator, but I would argue it is giving a good operator better tools to get more reliable results and help to deliver truly accurate application."