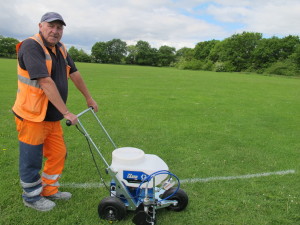 Walsall Borough Council received a Graco Fieldlazer S90 MKII from Amenity Land Solutions (ALS) on the 27th February 2015. They wanted machines that produced premium quality lines, easy to use and would replace their older machines that required charging more frequently.

After a demonstration was arranged showing the assembly, usage and cleaning of the Graco MKII, they were left with the linemarker to trial for two weeks. The grounds team found the initial set up of the machine simple and straight forward. The general day to day use was easy and efficient which they love. These features persuaded them to go ahead and purchase two on a permanent basis in March.

The straight forward use and easy clean aspect of the MKII, along with the high quality of line produced, are their favourite features of the new and improved MKII model.

Commenting on the machine's value for money, Grounds Manager Glyn Wilkes said: "Yes - definitely, compared to other markers of similar price, the Graco is much better quality. We estimate that in terms of paint consumption, it uses about 40% less than other brand new machines available. As we are also yet to charge the battery after marking out approximately 10 football pitches, it is saving money and labour hours. We are currently marking our school pitches every two weeks without any problems. We would definitely recommend this linemarking machine to others. Our operators are now marking out in nearly half the time as the machines efficiency in using much less paint, means less time refilling."

The new MKII version of the Graco Fieldlazer S90 comes with an enhanced battery life of 22Ahr, new charging indicator lights and connection, improved seals and bearings of motor compartment, redesigned pump filter, and a redesign of the spray gun to eliminate clogging issues. These, combined with the existing high pressure airless spray technology, help the Graco MKII to create crisp, high quality lines that Walsall Council consider to be the best produced from any machine they have used. The high pressure spray aids in reducing water and paint mix volumes, meaning much quicker drying times. The adjustable spray shields help create straight lines in windy conditions. 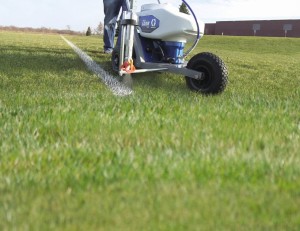 For those that want high quality, and defined, long lasting lines from a machine which is capable of marking out over 10 football pitches in one battery life, then the Graco MKII is a forerunner to be considered. MAX-LINE Lazer One Shot Paint and MAX-LINE Platinum have been optimised for use through the Graco Fieldlazer S90.

The Graco S90 is used to mark out the pitch at Rio de Janeiro's historical Maracana stadium, home of the World Cup Final 2014.

Enquire about a demonstration or for more information visit Graco Fieldlazer S90 MKII.