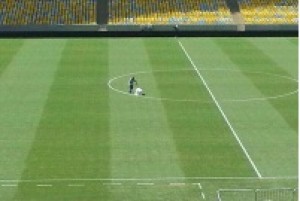 In preparation of the World Cup 2014, Graco's FieldLazer S90 was used to mark the fields of Brazil's largest football stadium; the historical Maracana stadium in Rio de Janeiro. The Graco FieldLazer field marking machines have been recognized worldwide for delivering brighter, longer-lasting lines with less paint. The Airless Spraying atomizes the paint, produces fine particles, and gives bright, sharp and uniform lines and therefore ideal for these historical events.

This is the second time that the Maracana will host a World Cup. The stadium was built in 1950 to host the FIFA World Cup in which Brazil was beaten 2-1 by Uruguay in the final game. The stadium seats 78,838 spectators, making it the largest stadium in Brazil and South America.

The FieldLazer S90 Linemarker is a revolution in spray line marking. With Tilt-N-Pour removable hopper, one button operation and proven RAC 5 spray tips, the S90 is designed for easy start up, use and cleaning, saving you both time and money.

This unique line marker can be purchased from the Pitchcare Shop