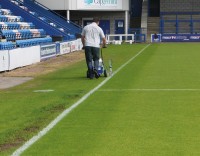 For me, the story starts about two years ago when I took a call from an American. He asked whether he could fly over and have a discussion about linemarkers. He duly did, and that discussion led to the development of the world's first battery operated high pressure airless spray linemarker or 'striper' as the Americans call them.

From a personal point of view, I had always preferred transfer wheel markers, based on the facts that they weren't prone to blockages like spray markers and, from a contracting point of view, much cheaper to run as less paint was used to mark out. Yet, the way the Graco patented concept was described to me left me interested to learn more.

The prototype machine arrived twelve months ago, and we viewed it, tested it and discussed its progress and possible modifications. We then waited eagerly for the first production machine to arrive in Europe (in April this year) and the final product certainly didn't disappoint.

The machine is simple in its design, yet well constructed and balanced. In fact, unless you don't bother spending the minute or two required to clean it after use, you're unlikely to have a problem with it.

As soon as the first S90 arrived, off I went to trial it, test paints and show some groundsmen the new technology. The more I used the machine and set up demonstrations, the more I could see why it came with all the traits and researched backing of a billion dollar business.

The high working pressure (900psi/48bar), forced through a stainless steel precision tip, atomises the paint and evenly coats the whole grass plant with one pass. The machine rarely blocks but, in the event, the reversible tip makes it just a five second job to clear, without mess, whilst the high pressure allows good quality concentrated paint through it for, what I would regard as, a 'TV line'.

The various demonstrations carried out to dozens of groundsmen at different venues showed that a full size pitch could be marked out with between 4-5 litres of paint mix (3 or 4-1), depending on walking speed.

In fact, I've overmarked private club and local authority pitches in as little as seven minutes, using around 3 litres of diluted paint.

I had consistently been told by our industry's paint manufacturers that you needed a minimum amount of pigment to cover the leaf, and it was impossible to reduce the actual concentrate in a mix, but they have all been coming from the angle of low pressure/high volume systems that all operate with a diaphragm pump.

The fact is that the atomisation of paint solution provides a much finer covering across the whole leaf, and actually provides a longer lasting line than when using the same paint through the conventional spray markers.

Not only was I finding a consistent reduction in concentrated paint, I also realised that the water volume could be reduced enormously as well, in fact completely, if required.

There are many attributes to this machine, but ultimately it does what it says on the tin. The one thing that occurred to me, though, was that the unique and patented piston pump high pressure system is far superior to the low pressure diaphragm systems that are currently on the market. 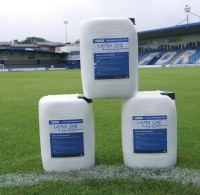 This delivery meant that the type of paint used could be modified. There has been much testing of different formulations and precision tips to find the optimum paint, but finally the Lazer 'One-shot' formulation has been achieved.

The S90 forces the more viscous paint, under high pressure, through an RAC 313 tip at around 0.31 litres per minute. So, to overmark a full size football pitch, taking ten minutes, uses 3.1 litres of paint, without the need for any water or mixing.

More so, this combination allows the end user to mark out up to seven pitches on just one tank full of paint (22.5 litres), thereby saving more time in not having to return to base to mix and refill.

The machine marks an equally perfect line on long pile 3G pitches as well as it performs on natural grass.
In summary, the S90 delivers a no nonsense consistency, which means that cost reductions don't just relate to paint saved but, more importantly, in freeing up labour time for other works.

The reason for writing this article is quite simple; the S90 has impressed all the people who have seen it put through its paces but, amusingly, the negative feedback I've encountered is that the brand is unknown.

Until two years ago, I was also blissfully unaware of the Graco company and, coincidentally, it took a trip to Azerbaijan to see one in the flesh. I remember walking into a warehouse by the pitches at FC Gabala, (a provincial club in the northern foothills of the country), and looking at some antiquated hand tools and a very rusty rotary mower of unknown origin. Alongside these tools was a Graco S100 and the guy next to me said, well at least they've got something worthwhile here. I said I'd never seen one before and he then described Graco as the 'Rolls Royce of Linemarkers'.

Coincidentally, the S100 and the other bigger brothers and sisters in the Graco range are regularly used by professional linemarking contractors in the UK and Ireland. Perhaps you've wondered how the sponsors' logos you see on stadium pitches such as Croke Park, the Aviva and the Millennium are applied.

A $1bn company that are quoted on the New York Stock exchange and currently employ more than 2,600 people worldwide. One of the world's premier manufacturers of fluid-handling equipment and systems.

Consider, for instance, that Graco equipment squeezes tomato paste onto millions of frozen pizzas, pumps oil and lubricating fluids into millions of cars, applies paint and plaster to homes, business and industrial installations, and that it helps give cars made around the world their high-gloss finishes.

All of this seems a long journey from a cold winter's day in Minneapolis in 1926, when Russell Gray figured there had to be a better way to lubricate cars than by using hand-operated grease guns. The temperature had dropped so low, the grease was impossible to move.

To meet that need, he developed a grease gun powered by air pressure. Favourable reaction from service station owners and a growing automobile market led Russell and his brother, Leil, to form a business to market Russell's new grease gun. The result was Gray Company Inc.
During the next two decades Russell and Leil guided the company through sustained growth, primarily with lubrication pumps for automobiles.

By 1948, the company found another foothold with its first paint pump and, a year later, introduced a direct-from-drum pump for heavy-duty industrial fluid handling. By the mid-1950s the Gray Company continued to be a leader in automobile servicing, and also established itself in paint spraying and finishing, food handling, cleaning, and literally hundreds of different applications areas.

With the development of the airless spray gun in 1957, which made the company a market leader in spray coating and painting, the Graco of today began to take shape.

When Gray Company went public in 1969 and changed its name to Graco, sales stood at $33 million. Growth continued. By the decade's end Graco, through solidifying its position in existing markets and entering new ones, would pass $100 million in sales. Important decisions had also been made, including the decision to make significant strategic investments in finishing technology, that would set the stage for even greater growth.

As Graco moves into the 21st century, the company defines its basic mission as "service to people through profitable growth." Both objectives are being met as Graco has become a world leader in complete fluid handling systems and packages that move, control, deliver, dispense and apply fluids in commercial and industrial settings.

Graco is the No1 producer of linemarking equipment in the USA.

The Graco Linemarker is available in the Pitchcare Shop