by Laurence Gale MSc
in Machinery & Mechanics, Industry News, and Golf
on 05 Apr 2015 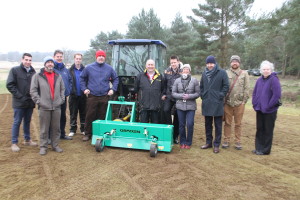 It has been nine months since Charterhouse took on the distribution of the Graden range of Verticutters from R & K Kensett.

In that time, Charterhouse have been setting up their dealership and management structure to promote the sales and backup of this unique product range.

To help bring us up to speed with the latest developments and have a closer insight into the Graden Products, a number of the UK trade press were invited to attend a demonstration day at the prestigious Hankley Common Golf Course in Surrey. The location is well placed for Charterhouse who, over the years, has used the course as a base for product testing.

Hankley Common is regarded as one of the best inland heathland courses and, for the last 25 years, has been under the stewardship of Course Manager Gareth Roberts.

I arrived early and was keen to get a tour of the course so, after a timely chat with the course's head mechanic, I soon found myself being driven around the course for some photo opportunites.

The course and surrounding area are classified as a 'Site of Special Scientific Interest' (SSSI), which includes a number of indigenous trees such as Rowan, Oak and Silver Birch, together with the invading Scots Pine. The course is also home to many birds and animals, including the rare Dartford Warbler, Woodlark, Night Jar, Adder, Deer, Badger and the Sand Lizard. 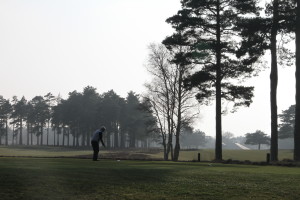 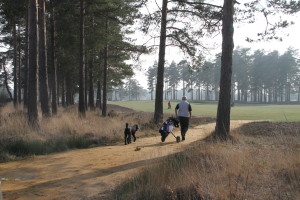 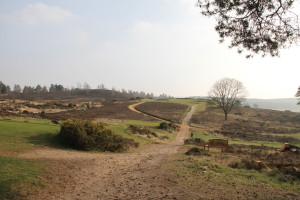 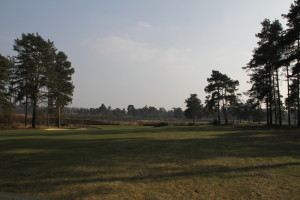 The 18 hole, immaculately kept, golf course is set amongst 800 acres of prime Surrey heathland, which must be an amazing sight when all the natural heather comes into flower during late summer.

The aim of the day was to give the members of the press the opportunity to learn more about the products and have some hands on experience of using the machines. The day began with a welcome from Charterhouse Sales Manager, Nick Darking.

Nick was keen to reflect on the fact that the success of the Graden was purely down to the endeavour and passion of the late Keith Kensett. Since the Graden's introduction to the industry back in 2002 it has gradually built ups its reputation of being one of the most prolific verticutters/scarifers on the market.

Nick introducing us to John Fitzpatrick, who was with the previous Graden distributor and has joined Charterhouse as 'Graden Product Specialist'. His appointment is part of a company-wide 'staff-strengthening' programme.

John has been in the groundcare industry since he left school, gaining experience in all areas, working on bowling greens, cricket squares, football and rugby pitches as well as in sales before joining contractor, Keith Kensett. It was after Kensett began to work with Graden machinery that John became synonymous with the product. 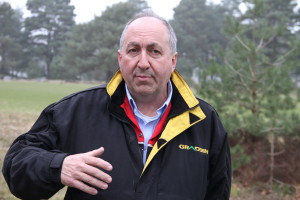 The first set of demonstrations was centred around the tractor mounted Gradens; the Swing Wing and GBS 1200. "What makes these machines unique", he began, "is the speed at which they can accurately function. This means that contractors, groundsmen and greenkeepers can get the job done quickly, before the weather turns bad, offering time savings over other machines."

The Swing Wing is belt driven, available in two working widths - 1.5m and 2.0m, and is fitted with 3 individual floating heads. It is ideal for greens, tees and fairways, as well as cricket outfields and squares. The GBS 1200 is a 1.2m straight reeled verticutter ideal for flat areas such as sports pitches, cricket squares, tennis courts, golf tees and approaches etc. As John explained, "The Swing Wing in the 1.5 metre version might be a simple unit, but boy does it carry some muscle! At a depth of 8mm a greenkeeper can verticut a whole fairway in just 2 hours."

I was impressed with both the speed and robustness of the two machines; extremely simple in their design and ease of use, no doubt a good selling point for contractors. The versatility of the machine, and what can be achieved with it, opens up a lot of opportunities for the type of renovation work it can achieve. It is also not a machine that needs to be stuck in the shed and only used for end of season renovations, as it can be used regularly to clean out any surface debris and increase air flow around the base of the grass plant. 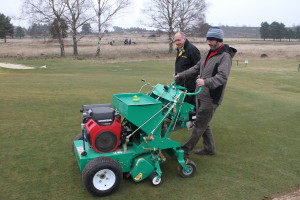 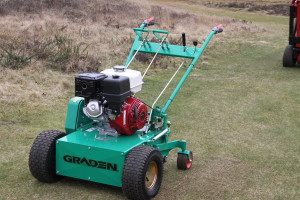 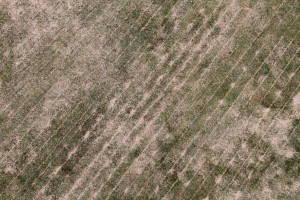 Next up, came the two pedestrian models in the range; the GS04 'Original Graden' and the critically-acclaimed Contour Sand Injection (CSI) unit. The GS04 was originally designed for cricket squares, but has now found a home on most sports surfaces. Offering a 0.4m cutting width and variable cutting depth from 1mm-45mm, this machine can remove up to 22% of a green in one treatment (depending on blade width and spacing).

The ingenious CSI is a scarifier/aerator with the ability to scarify to any depth from 1mm to 40mm, whilst using gravity feed system to simultaneously backfill the grooves with either sand or a combination of sand and seed to improve drainage and rooting. The floating head makes it perfect for undulating areas such as golf greens, tees and approaches.

Both these machines are now widely used in the fine turf industry, particularly on golf and bowling greens, to control thatch content and improve air and drainage performance in the top 40mm of the playing surface. There have been many articles written about thatch control with some agronomists identifying that, on mature greens, the area impacted/removed per year should be about 15-20% to effectively control organic matter build-up. 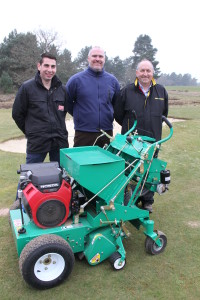 Each pass with the Graden CSI removes around 7%, therefore two treatments per year is enough to assist in the creation of optimum surface conditions. In addition, the result is a clean, level playing surface with minimal signs of damage, meaning the green is playable virtually immediately after treatment. 18 greens could take as little as twodays to treat.

After the demonstrations by John, a number of the members of the press where able to try out the machine themselves, I volunteered to have a go with the Graden CSI, I was amazed at the power and speed of operation; a truly well built machine that can do two jobs in one. As a scarifier/aerator, the CSI has the ability to scarify to any depth between 1mm-40mm whilst simultaneously backfilling the grooves with either sand or a combination of sand and seed.

Powered by a 30hp V-Twin Honda engine, the CSI has a hydrostatic transmission and a 100kg sand hopper. Its multi-functionality significantly reduces the time required to complete the job, reducing play downtime without causing any detrimental effect to ground firmness.

It was nice to spend time with John and get a more in-depth, hands on approach and understanding of what can be achieved with these machines. The choice of pedestrian and tractor mounted Graden machines certainly helps give groundsmen a greater opportunity in dealing with thatch and surface drainage issues on a range of different sports surfaces.

I would like to thank Nick Darking for inviting me and giving me the chance to see close at hand the complete range of Graden products now on offer from the Charterhouse portfolio of products.