by Louise Prettyman
in Machinery & Mechanics
on 20 Nov 2014

0 Graden Sand Injector - past and present. 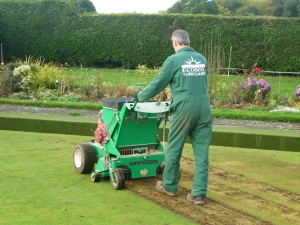 Some Golf courses have out of control organic matter, as bad as 12%. At that level they have no option than to mechanically remove it and put sand in instead to get the greens back to a healthier state - enter the Graden Sand Injector. Even if they have an acceptable level of organic matter a Graden fits into the maintenance scheme as prevention is always better than cure.

One company that knows better than most about organic matter control is Ecosol Turfcare. MD Bretton King gives the background, "In 2001 or 2002 I was at a golf show in the US where I believe Keith Kensett was first shown a Graden machine.

His boldness and vision resulted in the Graden name being introduced to the UK and Europe and really took off with it. Whilst we had been using 'Drill-n-Fill' machinery from the US we believed there was nothing like the Graden Contour Sand Injection machine when we first set eyes on it some years later. I'm pleased that Charterhouse Turf Machinery has now taken on the UK distribution as it fits very nicely within their product portfolio - from which we have several examples including a new Graden."

The Graden Contour Sand Injection machine is a scarifier/aerator with the ability to scarify to any depth from 1mm to 40mm, whilst simultaneously backfilling the grooves with either sand or a combination of sand and seed to improve drainage and rooting. It works to remove thatch and organic matter that might impede water movement.

It sinks it into the ground incredibly deeply compared to a conventional scarifier using 2mm wide or 3mm wide blades spaced at 25mm centres to remove such matter and offer stability to the surface of the green. The result is a lovely, true level surface with very little sign of any damage with only the parallel grooves visible. The green is playable virtually immediately, certainly playable within an hour or two. 18 greens would take between about 2 days to treat.

Bretton again, "In the early 2000's they would have gone in only about 5mm/10mm and not been able to fill in the holes created. Perhaps sand was broadcast on to the green and brushed back and forth, but the machine running over the green meant the walls of the open grooves were pushed together so the sand could not get in anyway. This simply meant that the voids they were trying to fill, weren't! The Graden was a breath of fresh air - it could go deeper; rip out organic matter; back fill with sand and all in one pass!"