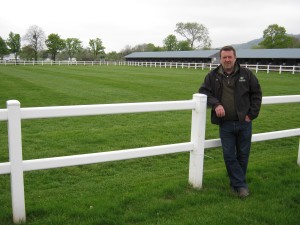 Graeme Balmer has been working on sports pitches his whole life. He began as a cricket coach and groundsman at a public school before branching out 15 years ago and concentrating on grounds maintenance as GDB groundcare.

Today he works for the Three Counties Showground and Gloucester Rugby Club, as well as managing to slot in being an ECB Pitch Advisor. In two years he has managed to turn round the quality of the grass at the Three Counties to a very acceptable level.

"The Managing Director of the Rugby Club moved to the Three counties Showground," he explained, "and that's how I became involved. The problem was a real lack of maintenance on the sports arenas with no renovation work ever being carried out.

The grass was very poor quality and the clay like soil was quite compacted. I started with an Autumn programme after consultation with Headlands' Adi Masters. Fertiliser can only be put down before events take place so we decided to put Multigreen 6 month controlled release fertiliser on at the start of the year as it would work throughout the show period."

In the first year of applying Multigreen Graeme received good reactions. The showground management received good comments from the Equestrian teams who ride in the arena, and others who said they have never seen the grass looking so good in over 20 years. When the effect of the spring/summer fertiliser started to wear off, Headland's Blaukorn 15-3-20 (an Autumn/Winter outfield fertiliser) was applied in October/November.

This year, Multigreen will be applied during the first week of April. The main event is the RHS flower show, which is the first weekend in May so Graeme wants to get the Multigreen down a good month before that to give it time to achieve maximum grass cover and be in the best condition.

During the year, after shows have taken place, Graeme will go in and aerate and re-seed the bare areas. This often means working to tight deadlines as when one show goes, there's only a limited time until the next one is in. After the flower show, Graeme has only 3 weeks to get everything done before the Three Counties Show.

That is why it is so important to him to have the grass in tip-top condition as much as he can because if the grass has gone into the event strong, when people are moving things around putting tents down etc, it has a better chance of coming out okay with quicker recovery.

Pitchcare are a distributor of Headland Products