by Rosie Duckworth
in Industry News, Machinery & Mechanics, and People
on 21 Jul 2016 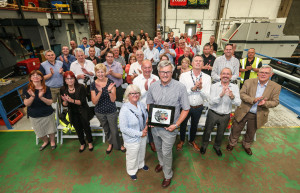 Graham Dale, a highly respected and well-known figure in the professional turf machinery industry, has retired from Lely Turfcare after an impressive 33 years working with the Lely organisation and 36 years associated with Toro.

Graham joined Lely when it took over the UK distribution of Toro in 1983, bringing with him an expanding knowledge and experience of the Toro range of products, having spent three years working for then distributor Autoturfcare. For the majority of his career at Lely, Graham has led the company, handling the responsibility of both the agricultural and turf businesses since he was appointed managing director in 1990 - a position he held for 26 years.

He says one of the milestones of his career was seeing the launch of the Toro Student Greenkeeper of the Year Awards - the first joint educational initiative undertaken by BIGGA - which is just as important now, 27 years later. Other highlights include helping to introduce the first robotic milking system by Lely, and receiving the prestigious Toro Partners in Excellence award for 2013 in Toro's centenary year.

Throughout his time at Lely, Graham has seen the company grow exponentially. When he first began working with Lely in 1983 the company had a turnover of £10 million; today, it is over £50 million.

He says the big changes to the industry he has seen have been the developments stemming from the ever-rising standard of sports turf presentation, particularly in golf, leading to a greater demand for high quality professional turf machinery, and the rise of technology, saying: "In 1983 it was hard to imagine that within a very few years we would all be able to communicate using a very small hand held computer which we now all recognise as a smart phone, or the speed with which we can gather intel online."

Now Graham is enjoying his retirement living in Norfolk with his wife Debbie. He says: "I have been fortunate to work with a great group of people and I would like to thank everyone I've worked with over the years. In particular, Cees Dalebout who supported me through some very challenging times for our business and all the Lely management over the years from Trevor Moisey in the 90s, Peter Horlock, Peter Wheeler, and Peter Mansfield and David Cole more recently."

He feels optimistic about the future of Lely and signs off from a distinguished career by saying: "Lely has an exciting future ahead of it. Yes, there will be changes and challenges, but also lots of opportunities."