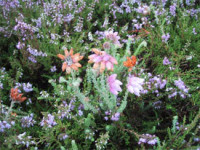 There is considerably more heather in the North of England and upland areas throughout the U.K. generally; but in the south the species is confined to a few fragmented, and often receding patches in Dorset, Suffolk, Sussex, Surrey and Hampshire. Obviously, our southern heath lands have been under threat during the last century by a variety of factors including, industry, agriculture, housing and quarrying. The northern uplands have not been affected to the same extent.

The most recent available figures would suggest that of our 2,800 U.K and Irish golf clubs, 440 are heathland courses, and approx. 140 of these are situated in the vulnerable south. With an average heather coverage of six point two hectares per course, these southern golf clubs would appear to be responsible for an approximate 868 hectares of heather between them. With heathland courses back in fashion and conservation issues high, most members appreciate the importance of heather to the playing character of the course, and few of them would wish to see the plant decline further. 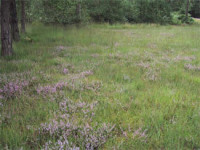 Removal of weeds and grasses

The collection of leaves

Removal of turf from dormant heather seedbeds, coupled with over seeding in known decolonised areas.

To succeed in their aim, golf clubs need to commit themselves financially to a heathland rejuvenation programme, freeing the resources needed to begin such a major project.

Tackling the grass/weed control is the best way to start, and due to the undulating terrain beneath most heather areas, the nature of the work, and the specialist equipment needed, the majority of golf courses decide to contract the work out. Here at Weed Free, we are known to be experienced in this field, and you can confidently put this part of the programme into our hands. 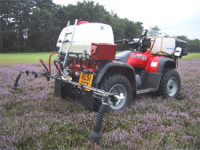 Faced with treating relatively small patches of heather, which are surrounded by grass, Weed Free operators choose their routes to ensure that neither they, nor the ATV comes into direct contact with the desirable grass. This precaution is essential when applying a powerful herbicide, and once the operation is complete, we will insist that all golf traffic be kept away from treated areas to minimise the risk of the chemical being transported onto the fairways.

Returning in May to one of the several heathland golf courses, which we are involved with, we were gratified to find that the company's January heather application had done its job. All the weeds, mainly Cats Ear, Sheep Sorrell, Thistles, and Rose Bay Willow Herb had gone, leaving voids for new growth. Grass removal was almost as good, with the exception of the purple moor grass that was still present, but less dense.

By August, the heather was responding to treatment and producing new growth, formerly blocked by weeds and grasses. Inspection revealed a denser plant, which confirmed our theories and answered any questions we might have had about the effectiveness of the process. The results were much better than expected and have enhanced the work undertaken in previous years. It has taken at least three years of grass control in heather on this particular golf course to get to this stage and it is now very noticeable.

The STRI warns of the pressures on golf courses of golfers trampling over the plant, which is a slow grower and takes years to establish. 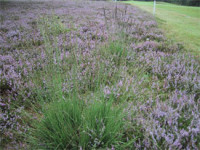 Weed Free has received many positive comments form Golf Club Secretaries, Chairman of Greens and the Golf Club Members. The clubs as a whole would appear to be heeding warnings, and winning the battle to preserve their heathland against considerable odds. At one Club the Chairman of Greens reports compliments on the heather from the club's membership, stating that in his opinion the heather has been better this year than in the last 20. The club is aware that this is the beginning of a long process, but the members appreciate the immediately visible improvements, and Weed Free have had their efforts rewarded with a booking for more treatment this winter.

Weed Free are proactive in assisting golf clubs preserving heather, especially in the south and can offer you expertise in this field, gained through hands on experience over the past few years.

Mike Seaton is the MD of Weed Free