0 Grass For All Seasons 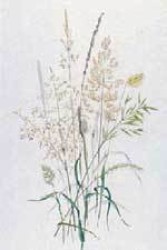 The grass family is one of the largest and most successful flowering plant families on earth consisting of around
10 000 species. Grasses are adapted to most habitats from tropical rainforest, through arid desert to temperate prairies and steppe. One grass, a species of Deschampsia, is one of only two flowering plant species that grow in Antarctica. Grass seems to grow anywhere and everywhere. So why do we need to lavish such large amounts of money, and spend so much time trying to make it grow on our sports pitches?

The short answer is that the requirements are so specific: true, grass will grow almost anywhere but getting it to grow to produce an appropriate, long-lasting playing surface is another, far more demanding matter. Only a handful of grass species are appropriate for turf use in the UK and these are the very same species used for producing forage for animal feed.


One species, perennial ryegrass (Lolium perenne L.), provides the playing surface of choice for our major outdoor sports: soccer and rugby in the winter, cricket and tennis in the summer. Its importance is reflected in seed sales which represent 20-25% of the 20,000 tonnes sold annually for amenity and forage use in the UK. In the USA, sales of turf grass seed in total make it the second most economically important crop behind hybrid maize. Of this, ryegrass seed makes up the greatest tonnage where, in Oregon's Willamette Valley, 70,000 tonnes are produced annually.

Two intrinsic properties of perennial ryegrass make it a species suited both as an animal feed and as a surface for playing outdoor sport: it can withstand and recover from, on the one hand, physical abrasion, crushing and trampling (livestock and human) and, on the other, regular and close cutting (grazing or mowing). This is achieved by virtue of the grass shoot growing points being close to ground level ensheathed by a series of protective leaves. It is no coincidence that the highly productive natural ryegrass pastures of Romney Marsh in Kent which have evolved over many decades of selection under intensive grazing pressure are also traditional turf production fields.

But let's be interactive about this: I have certain objectives in my turfgrass breeding programme, but if these bear no relation to what the turf manager wants I'm wasting my time. So what do you want in a grass:

Probably all of these, but realistically these are traits that cannot often be combined.

That Antarctic grass I mentioned at the beginning of this piece would easily withstand the hardest UK winter ever recorded but you wouldn't want to grow it in your stadium even if the seed companies could produce sufficient quantities of seed. But within the boundaries of mutual exclusion, improvements can be made. So let me know what you want and I will attempt to explain current knowledge, current products, possibilities for the future, and, in this world of marketing hyperbole, improbabilities for the future.