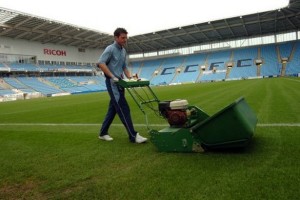 The former head groundsman for the Sky Blues has signed for fierce Midlands rivals Leicester City.

John Ledwidge has been in charge of keeping the Ricoh Arena pitch looking great for about four and a half years.

The 28-year-old was employed as head groundsman by Coventry City FC when they were still playing at the Ricoh.

When the club moved out to play 'home' games in Northampton last year he was taken on by ACL to carry on caring for the Ricoh pitch - and also look after the Alan Higgs Centre.

John had initially started out working for the Sky Blues voluntarily as a 13-year-old at the club's old ground Highfield Road before he started as an apprentice at the Ryton training ground aged 16.

It is not the first time John has left to join a rival team, his time at Coventry split with a brief stint at Aston Villa, but the groundsman insists leaving was a tough decision.

John, who lives a stone's throw away from CCFC's former Highfield Road home, said: "It is with a heavy heart I leave this place, I have really enjoyed my time here.

"Through the ups and downs on and off the field I have had a great time working for the football club and at the Ricoh Arena.

"The highlight has to be the Olympics which was something else.

"Turning the pitch around from the Coldplay concert to hosting 12 Olympic matches was madness but it was a fantastic challenge and there has to be a lot of credit given to my team for that."

Formerly the youngest head groundsman in the Football League, at the age of 24, John aims to become a Premier League groundsman by the time he's 30 - something he thinks he can achieve with Leicester.