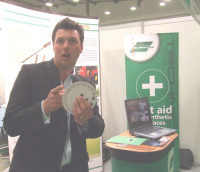 Technical Surfaces were recently invited to attend the Grass Roots Football Show 2007 held at the Ricoh Arena, home of Coventry FC. The show - now in its second year - was a great success, attracting people and sports clubs from all over the country.

A number of footballing greats attended the show and provision was made for some areas of the hall to be given over to demonstrations of coaching and technical skills.

Former England manager Graham Taylor was present and ran some of the coaching courses for the entertainment of the crowd, together with his BBC Radio 5 Live colleague and former Wolverhampton Wanderers striker Don Goodman.

Technical Surfaces were able to link up with TigerTurf, the UK's leading artificial grass manufacturer, who echoed the sentiment of the successful and interesting show.

A further Exhibition is planned for the summer of 2008 using the even bigger venue of the National Exhibition Centre in Birmingham such has been the success of the show this year.

Also in attendance was International magician John Danbury. John, who has made a number of television appearances, was interested in the concept of the maintenance of synthetic surfaces along with the varied types of surfaces that are now available.

Indeed, John commented on the entire weekend as being "magic!" In return for regaling the onlookers with some magic tricks, Technical Surfaces bought John a number of drinks.

John was certainly able to make them disappear…