A regular overseeding programme has achieved dramatic improvements to grass cover and given more consistent conditions at an Essex golf course.

*The 18-hole parkland course at the North Weald Golf and Country Club, based in Essex, has been the subject of a dedicated maintenance programme over the last three-years. "Quality of playing surfaces has been raised significantly," says Bryan Girling, Course Manager.

Previously in a poor state due to a lack of resources, the club's current owner, Andrew Lloyd-Skinner, looked to improve course conditions. He contacted Rigby Taylor, following a personal recommendation.

*Managing the 260-acres site, Girling works with his team of four, who he describes as 'a hard working bunch'. They made vital improvements to the fairways, through a more intensive management programme. Girling describes the seed bed: "People thought it would be impossible to make things grow, as parts of our course are on Essex Clay. 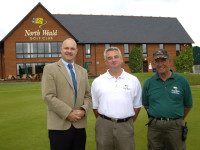 For the first year this programme was used on five of the fairways, but due to tremendous results has been increased to six and is on-going. He adds: "We were particularly interested to see what happened on the 11th, as this was the worst fairway on the course. "The fescue and bent density was very poor and in the winter this made the rye very obvious. "Three seasons have passed and it is now one of the best, so the programme has reaped dramatic improvements.

"A smoother playing surface has been achieved through creating this more uniform and dense sward." Investment has also been made in new machinery. The club has added a fairway mower, greens mower, out-front rotary for the rough, new spinner-spreader and are in the process of buying an AFT trencher for drainage work on the course, plus another tractor.

North Weald has its own 4.5million gallon reservoir, but the fairways did suffer somewhat last summer, because currently they are not linked to the irrigation system. This is one of the club's planned future projects.

*Currently major redevelopment work is taking place at the club and this has included the introduction of a new driving range. Girling explains: "Following cultivation, we seeded the range with a new formulation on the 7th November last year. "Shortly after I went on holiday for a fortnight and when I came back I
could not believe the growth that had taken place, especially for that time of year.

As the club opened the driving range complex in May, good germination and establishment gained time going into the spring, getting the complex up and running on time. Key considerations for the range were the wear aspect, in terms of continually picking up balls, together with drought tolerance and colour.
For this reason 20 per cent darker coloured ryegrass Neruda and 20 per cent Applaud were selected, as they both hold their colour well.

The mix also contains tall fescues 30 per cent Grande and 30 per cent Scorpiones, renowned for their long root development. They provide excellent drought tolerance, enabling the grass to stay greener in hot weather - when we get it - and perform well in wetter conditions. "It is just phenomenal what has been achieved by using these cultivars," says Girling.

"We have created a dense, hard wearing sward, which helps to reduce maintenance costs in terms of fertilizers and irrigation. "Golf courses need to look at various issues, the way climate change is going, with extreme heat and tremendous storms," he says. "Top Green and Rigby Taylor have hit these issues on the head with their cultivar development."

*Greens too have had a planned programme to improve conditions and overseeding took place with Mascot R105. On the tees Mascot R9, which contains perennial ryegrasses, has been sown on a very sandy rootzone to improve wearability and recoverability. A good working relationship has been paramount to the creation of this tailored project: Girling says: "Mounded areas are being developed to improve the character of the golf course and grass mixtures recommended to marry in with existing. "And it helps tremendously knowing I can phone Rigby Taylor at any time for technical advice."