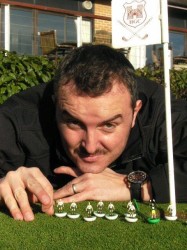 British Seed Houses is looking to put an extra 'kick' into its stand at BTME by staging a penalty shoot-out competition on a Subbuteo-size soccer pitch made up of real grass!

The UK's largest privately-owned grass seed company is offering 40 kilos of the Bent grass of their choice to the winner of the competition, which will take place over the three days of the show in January.

The pitch is being grown on one of BSH's cultivars, with timing critical to have it in best condition for 'the big kick-off'.

"Visitors to our stand, A45 in Hall A, will be invited to take five penalties against their favourite BSH representative. The highest score over the three days will win," said Richard Brown, Amenity Sales Manager for BSH.

In the event of a tie the names will be put into the BSH BTME Penalty Shoot-Out trophy and the winner drawn from there.

Richard, who is acting as 'head groundsman' for the pitch, said: "It's a labour of love to get the pitch ready. I'm monitoring it regularly and every few days give it a trim with a pair of clippers.

"In the meantime, my colleagues have been practising being goalkeeper, with varying degrees of success. No-one has yet shown themselves to be the table football equivalent of Peter Schmeichel or Gordon Banks!"

BSH has a number of other 'goals' for the Harrogate show:

• Showcasing 007 DSB, SR1119 and TYEE bentgrasses, to which BSH has exclusive rights to sell in the UK. The greens at 2012 Ryder Cup, played at the Medinah Country Club, were seeded with 007 DSB and SR1119, while the greens the US Open at The Olympic Club, Lakes Course, were seeded with 007DSB and TYEE.
• Groundsmen are being given the opportunity to create 'Your A20', their own version of BSH's mixture for Winter Sports Pitches, which is being upgraded to include a new cultivar, Eugenius, which is very highly rated in the Turfgrass Seed booklet 2013. There is also the option to have the seed dressed with a mycorrhizal seed coating to accelerate the establishment of grass plants and improve the efficiency of nutrient uptake.
• Richard will be presenting 'Where does your grass seed come from?' an interactive look at grass breeding and production with the audience invited to use personal key pads to take part anonymously in a fun quiz. It takes place in the Queen's Suite on Tuesday, 22 January, 11.15am to 11.45am.
• BSH is sponsoring Dr Fritz Lord, Product Manager/R&D Turf Fertiliser Expert - Germany, Compo Expert UK Ltd, who will be speaking on the 'Use of Plant Growth promoting Rhizobacteria (PGR) for healthy turf'. The seminar will deal with some stress factors and the effect of PGR in combination with special plant nutrients and trace elements. It takes place in the Queen's Suite, also on Tuesday, 22 January, 3.15pm to 3.45pm.