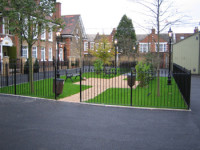 Lindum's Grassfelt, the living sward on a reinforced felt base is currently playing a mayor role in the re-creation of a typical London square. Situated at Chelsea Harbour on London's Thameside, the project, on the old Chelsea College of Art site includes a garden, house, office and business area to demonstrate in situ, the various applications of Microsoft software.

According to Sandi Wicks, a freelance set dresser and stylist, working for PCI Fitch Live Events, the production company masterminding the exhibition on Microsoft's behalf, the fact that Grassfelt could be laid directly onto the tarmac yard was an important factor in favour of the concept. "Our clients had to be talked into an outdoor event with real turf and trees, because they thought that the whole garden area would have to be excavated," she explains. "Using Grassfelt meant that we only had to dig pits for the trees."

Jackie Newton-Taylor, PCI Fitch's facilities manager is amazed that the 175 sq metres of reinforced turf, which has been down since the end of October, still looks good. "The whole garden looks fabulous," she reports, "although it's received nothing but rainwater."

Lindum's M.D. Stephen Fell says that obviously during a long dry period the turf would have to be watered and during the growing season it would need feeding. "Although this is the longest trial that we've had using Grassfelt on this medium, we know that the product has this extraordinary ability to keep growing. Once the felt is wet, it stays wet," he maintains. "It just seems to sustain itself remarkably well."

The garden will remain in place until the end of February (06), when the exhibition is dismantled.

For further information on Lindum's Grassfelt, contact the company on Tel: 01904 448675 or visit their website at: www.turf.co.uk