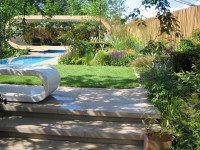 The multi medal winning Andy Sturgeon for The Cancer Research UK Garden, which took gold, first time show garden designer Yulia Badian for her Gardenshrink Chic Garden, Cradle and a Void, which won bronze, and Shelly Mosco whose design for the Speller Sculptures stand gave the company a certificate of commendation for outstanding presentation.

Andy Sturgeon, whose Merrill Lynch garden took gold last year, repeated his order for a 3.2metre square in one piece, saying that he wanted a lawn "with no ugly joins." Yulia Badian's curvaceous creation would have been difficult to turf using normal rolls, and as this was her first show garden she was taking no chances. "I wanted the turf in one nice piece so that I could roll it out like a carpet," she explains. "Large show garden designers get two weeks to build but with a small garden you only get a week." Shelly Mosco, wanted her turf to be lightweight and easy to handle. "We've got a contour in the design, a mound 2.5 metres in diameter and 500 mms high," she says. "I wanted to be sure that we could turf it and achieve a tight fit. Having one large piece that was stronger and more flexible than conventional turf meant that I could cut pieces out and pin it to shape."

After visiting the show Lindum's MD Stephen Fell commented on the considerable interest from garden designers in using Grassfelt for display and creative design.

For further information on Lindum's Grassfelt, contact the company on Tel: 01904 448675 or visit their website at www.turf.co.uk