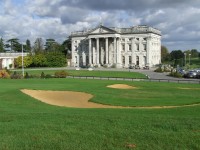 The stunning Moor Park Golf Club nestles within the leafy suburbs and commuter belt of south Hertfordshire, just outside Rickmansworth. The club has two Harry Colt designed 18-hole courses - the High and the West.

These sprawl out from the centrepiece of the club, its impressive clubhouse. The club found one part of its courses, however, were not up to their high standards - the bunkers. They called in Grassform Ltd. to Reshape, Rebuild or Renovate just about all of their bunkers on both courses. Originally clay lined, the club found that stone contamination and water logging was a major problem on the undulating courses and called in Grassform to assist in their project over a four year period. 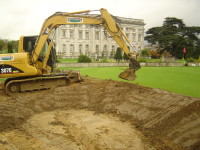 A major part of Moor Park's golfing schedule is corporate golf, which tends to continue to late October. Given this, Grassform commenced work at Moor Park in late 2003 on the first set of nine holes at the club. Under direction of course manager Stuart Bertram, who oversaw the work, Grassform removed some course bunkers but largely dug out the existing sand and clay content, cleared the surrounds and reshaped each bunker to suit the particular hole and location.

The expertise of Grassform excavator drivers was evident, says Stuart, as they carefully and skilfully built each bunker to his particular requirements. "The key to the project was to improve the playability of the bunkers and bring them up to a modern standard, whilst always bearing in mind the course aesthetics which is vitally important to the club" comments Stuart. 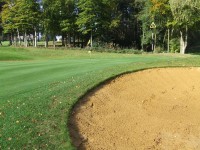 "Grassform worked with us over four years on this project and were very accommodating to meet the standards and criteria that the club set out to them for the refurbishments. The timing was important, as we had to work in with the late autumn/early winter time period and Grassform always fulfilled our expectations within their time here."

Once Grassform had worked their magic on each bunker, the course's own staff laid upside down turf in the base of each bunker, built revetted edges using turf layers and turfed the reshaped bunker surrounds. Also added was drainage in areas that required it. The final outcome of the project is that Moor Park now has a superbly built series of bunkers that are constructed to a high standard to complement the setting. Stuart Bertram concludes by saying "We have achieved our aim of gaining a more consistent bunker lie but with a slight increase in difficulty for our members through Grassform's reshaping and rebuilding expertise."

Grassform's managing director Mark Dunning commented on the Moor Park project: "The skill of our shapers working with the green staff ensured each phase of the project ran smoothly, this enabled the bunkers to be positioned to gain maximum effect and further enhance the courses excellent aesthetics."

For further information on Grassform's range of design, construction and landscaping services, please contact Mark Dunning on 01277 355500 or email mark@grassform.co.uk, or visit www.grassform.co.uk.