0 Grassroots racing a year round task for Catterick 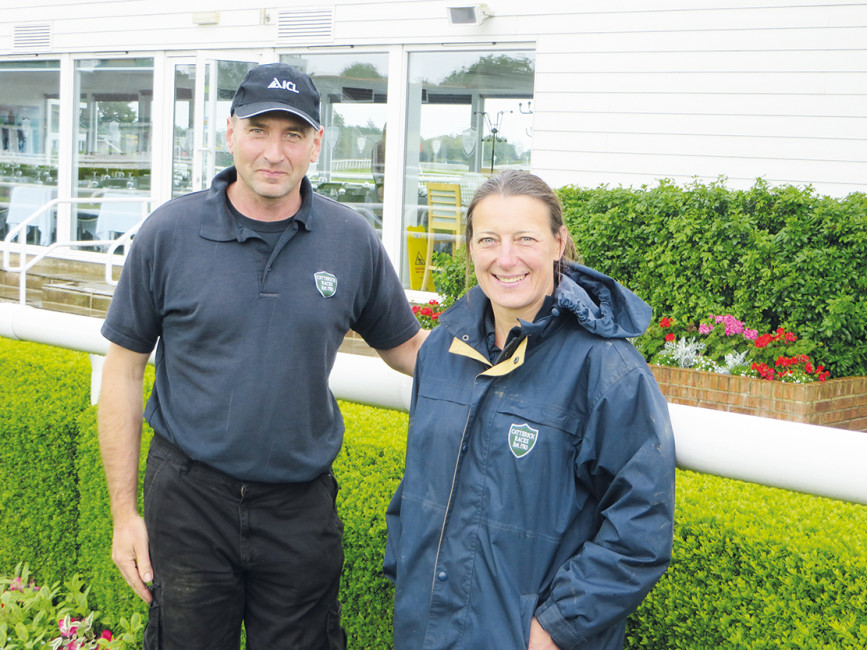 Racing all year round, with twenty-seven meetings in 2017, makes for a substantial workload for the team at dual purpose track Catterick Bridge. The independently run Yorkshire racecourse was established on land owned by the Worthington family in 1783 and has been run by Catterick Racecourse Company Ltd since 1921.

Its location and natural terrain bring both benefits and challenges, explains General Manager and Clerk of the Course Fiona Needham. "It's regarded as an ideal introductory track for horses under both codes, and we've had some nice success stories - Queen Kindly won her first races here and then went on to take the Lowther Stakes at York. We're close to the training hubs at Malton and Middleham, but attract horses from some of the leading trainers in the south, too."

The gently undulating flat course seems to suit some horses well, so punters can look forward to repeat winners, whilst the traditional permanent steeplechase fences and steady climb into the back straight provides a good test for national hunt horses, favoured by leading jump jockeys. 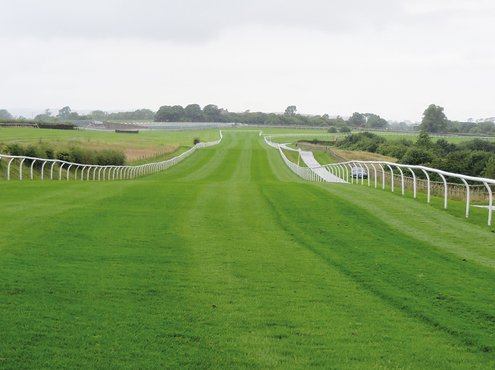 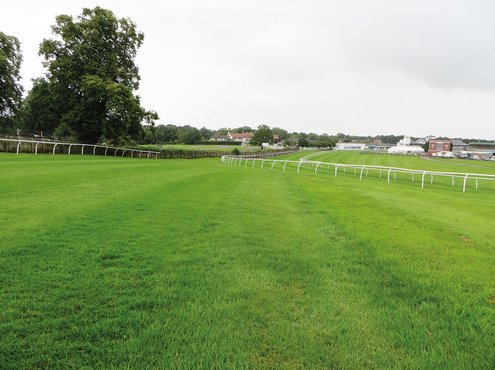 Flagship races include the North Yorkshire Grand National, run over a testing 3m 6f, and the Catterick Dash at the end of the flat season.

"We tend to attract a core racing crowd, although Catterick is also a good place to come for a first day's racing as it's not too big and daunting," comments Fiona.

The track itself is on sandy soils over gravel and, in the centre of the course where gravel was once extracted, a good sized lake now handily fulfils irrigation needs.

"It's a free draining track, and we can normally offer good ground in the winter months when other courses are wet," comments head groundsman Ed Fenwicke-Clennell. "The downside is that it can be hard to keep moisture topped up in the summer. We are also susceptible to frost and our jump meetings take place in a period when the grass doesn't grow!"

Recovery is an ongoing challenge - there is racing every month, with two meetings most months, and three in January, February, July, August and October.

"We get a lot of runners, which is good, but that takes its toll on the turf," he says. "We move rail to offer fresh ground as much as possible, but there are two crossover points between the flat and national hunt tracks that get additional wear and parts of the jumps track are quite narrow." 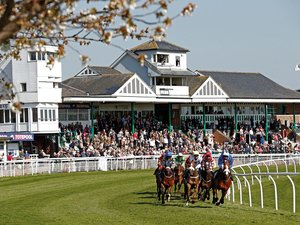 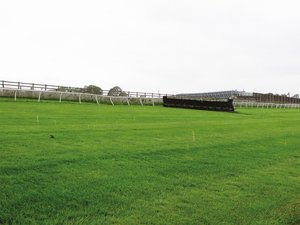 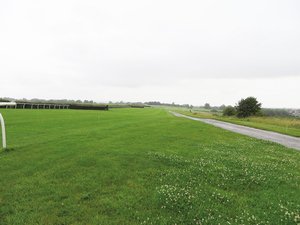 A small area on the back straight, where water can drain from adjacent fields, was identified as a candidate for drainage, but elsewhere sand slits are all that are needed.

Which is a good job, as the entire course has been classified as a historic site, with any excavations tightly controlled; permission from Historic England has to be sought for groundworks. Discoveries of roman artefacts during the construction of new Catterick junctions on the neighbouring A1M have led to repeated delays to that process!

The flat and jump tracks are renovated at the end of their respective seasons, with a contractor brought in to overseed the turf, paying particular attention to the crossover areas.

"We apply fertiliser and then irrigate if necessary," explains Ed. "I use a range of seed, mainly tetraploid ryegrasses."

Good results have been achieved using ProTurf 12:5:20 slow release fertiliser in the spring, plus Sierrablen 18:5:18 mid-summer on the flat course. 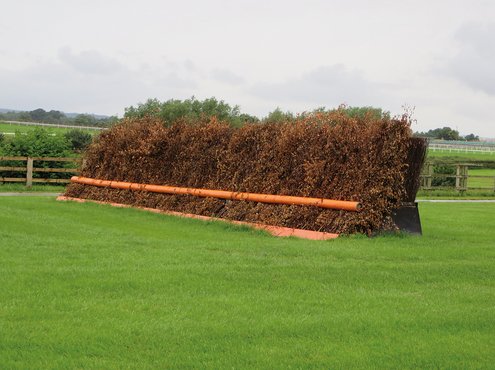 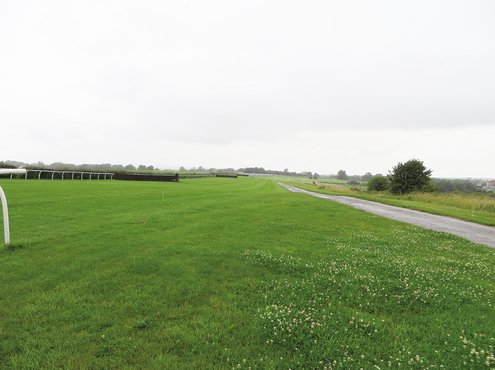 "We have seen significant improvements since moving to this programme," reports Ed.

The jumps tracks are Verti-drained twice a year, and the the flat track once a year, with additional work on the running lines as necessary. Attention is paid to spiking, when possible, and the home and paddock bends are hollow cored annually, as well as being slit and sanded prior to racing.

A combination of a Briggs boom and tow line irrigators are used as needed; the entire 5.75ha flat course can be watered in two 10 hour days. The 8.4ha jumps track rarely requires irrigation as the season does not get underway until November.

There's a lot of grass to mow, and Ed uses Port Agric and Perfect out-front tractor mounted mowers. The Perfect mower, from Dutch manufacturer Van Wamel, features a domed deck and overlapping blades to give a clean cut even in wet conditions.

"We mainly use this mower on the flat track for its quality cut, much improved on what we have had before," he comments. "The Port Agric comes in on the national hunt tracks and the car parks."

Cut heights are 80mm on the flat, and 100mm on the national hunt tracks, the latter gradually raised up to 150mm for the start of the season.

Machines are managed on an individual basis, purchased from a range of outlets on their merits and depending on workload. Groundstaff maintain their own machines with local engineers used for major servicing.

The latest addition to the fleet is an 85hp John Deere 5085M utility tractor.

"We had some reliability issues with our previous tractor and decided on a change of brand," explains Fiona. "Ed did his homework - trying out a number of models to get the right machine!" 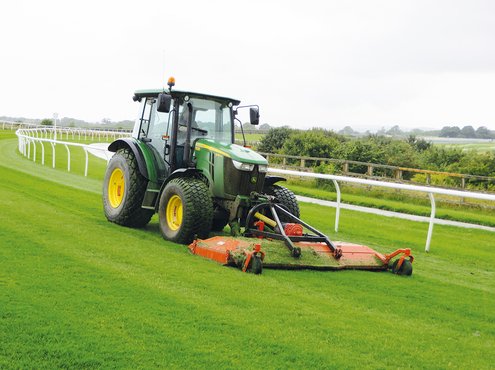 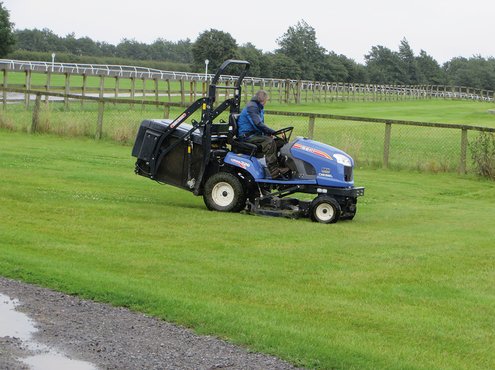 An Iseki compact with integrated cut and collect mower does duty on the tighter areas, while Primo Maxx growth regulator helps keep the grass under control along the rails; always a tricky area to tackle.

There are five full-time groundsmen including Ed, plus a stable manager, and experience is key. With the exception of an apprentice, most of the team have been at the track for many years. Ed is a relative 'newbie' having worked at Catterick for fourteen years!

Fiona, has been at Catterick for nine years, and also does raceday duty at other local tracks. "Have Going Stick, will travel," as she puts it.

Road access is another challenge - the stables and lads' hostel are across the A6136 from the course, and a new vehicle entrance and turnstile is being built on this road.

Local businesses enjoy hospitality on racedays and make use of the facilities for meetings at other times, whilst functions for the local army base and caravan rallies also provide non-racing income. 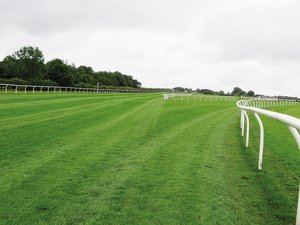 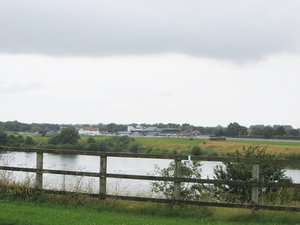 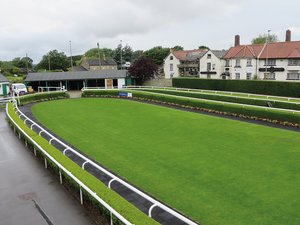 Further planned developments include new racecourse offices and saddling boxes, whilst the winners' enclosure is to be incorporated into the attractive parade ring.

A more ambitious project, for which Catterick Racecourse Company Ltd has secured planning permission in perpetuity, is a proposed all-weather flat track.

"There is a lot of interest in all-weather racing in the north, and the application includes floodlights so we could move towards the goal of more betting-friendly evening racing. But we were unable to act at the ideal time as we could not be guaranteed the required number of fixtures to make the project financially viable for an independently-run track," reflects Fiona.

"In the meantime, Newcastle has successfully met the demand. The plans are on hold for now but, in the future, who knows? It would certainly be popular with local trainers, who could also take the opportunities to use the track as gallops that we could offer."

A brush with history

Catterick is mentioned in the Domesday Book as Catrice. Pallet Hill, just to the north of the village church, is the site of the earthwork remains of a motte and bailey castle. It is thought to have been built by King Stephen in the mid 12th century to control the Great North Road (now the A1M) and has been designated a Scheduled Ancient Monument. 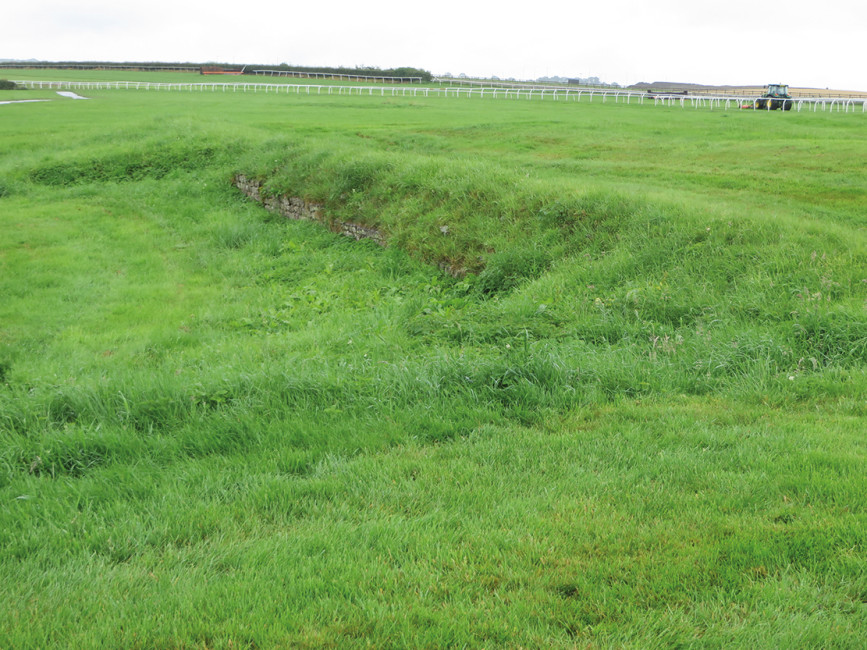 To the south of the village at the A1/A6163 interchange is the site of a small Roman roadside settlement and cemetery on Bainesse Farm, designated a Scheduled Ancient Monument.

In later times, Catterick prospered as a coaching town where travellers up the Great North Road would stop overnight and refresh themselves and their horses; a mile to the south-east are the surviving earthworks of Killerby Castle, a medieval motte-and-bailey castle.

Many sporting venues and facilities have links with historic sites, but these may only come to light when planning developments or renovations - special measures had to be taken to protect ancient sites in Greenwich Park when building the course for the equestrian events at the 2012 Olympics, for example.

Buildings, structures, earthworks, buried remains and the like can be scheduled as monuments by the Secretary of State (for Culture, Media and Sport) if they are of national importance for their historic, architectural, traditional, artistic or archaeological interest.

Scheduled Monument Consent is sought from Historic England, but the ultimate decision is made by the Secretary of State.

Products mentioned in this article are available from the Pitchcare shop