Grassroots sport in the West Midlands will gain a welcome boost this spring when freshly created playing fields come on stream to counter lost provision. 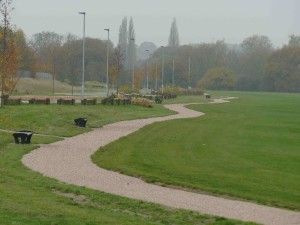 Specialist contractor CLS Sports has created new pitches on a 10.5-hectare site at Barnhurst Lane, Wolverhampton, under a project to regain fields lost to the Building School for the Future multibillion pound programme locally.

The scheme, supported by Sport England and the Football Foundation, creates an area equivalent to that lost under the schools initiative. CLS Sports own the specialised equipment needed to deliver this scale and style of project and are experienced in constructing pitches, including the surveying processes required and turfcare knowledge. The contractor won the work because from a quality/cost perspective, they proved to be the most competitive.

The works have been carried out to a high standard, the client, City of Wolverhampton, reports, and include sustainable drainage systems, car park soakaways and controlled outflow from the pitches to the local River Penk.

Barnhurst Lane has already been marked out for eight pitches and seeded with a ryegrass mix ready for expected handover this spring. Plans are afoot to stage Gaelic football on the site, although this is still to be confirmed.

With an emphasis on promoting biodiversity and to boost the attractiveness of the site through spring and summer, perimeter areas have been set aside for wildflower planting, creating a flush of colour and a lure for pollinating insects.

Bookings by local junior football clubs and Aldersley High Academy Trust next door to Barnhurst Lane are already helping secure the success of the facility as the local community look forward to renewed sporting provision well into the century.

"What has been created is a major new sporting facility that will have minimum impact on the environment and that the local community can benefit from," a spokesperson confirmed.