Southampton Football Club has a brand new pitch this season - laid between a Bon Jovi concert on the 11th June and a testimonial match for their club captain on 18th July!

At 27 years, Andy Gray is one of the youngest Head Groundsmen in the country. He arrived at 'The Dell', the then home of Southampton Football Club, in 1998, having qualified in Sportsturf at Sparsholt College. He joined the groundstaff as Assistant Groundsman, working under the respected Head Groundsman, Dave Roberts. He quickly worked his way up to Deputy Head Groundsman and, at the same time, spent three years as Head Groundsman at AFC Bournemouth, while continuing to fulfil his duties at the 'Saint's' new home, the St. Mary's Stadium.

When Dave Roberts moved to pastures new this January, Andy took over as Head Groundsman of the stadium with Graeme Mills in charge of the training grounds. They are assisted by Ricky Rawlins, Dan Osborne and Danny Silvestri and must be the youngest team of groundstaff in the whole of the football league.

"I sent Dave a text to tell him the good news" said Andy. "And, of course, he tried to take the credit! In fairness, he did such a great job that we have just carried on his good work. There was no need to change the maintenance programmes that Dave set up."

Ricky Rawlins and Dan Osborne still spend two days a week at Bournemouth's Fitness First stadium and, as if to prove what a talented young team they are, the Dean Park pitch finished fourth in division one. 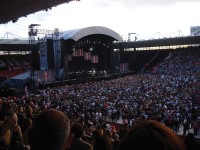 But, as is the way with modern stadia, financial requirements dictate that the close season is used to boost the coffers. Following a number of regional games, a Bon Jovi concert was scheduled for mid June at St. Mary's. This was to be followed by a testimonial match for the club captain, Claus Lundekvam, just five weeks later.

It was clear that the existing pitch would not recover in time for the testimonial game and, with the opportunity to also improve drainage, Andy took the decision to have a new pitch installed.

"We had 29,000 people here for the Bon Jovi concert," said Andy "and lots of other games up to the end of May, so we knew that the pitch would take a hammering."

With just a five-week gap between events there was insufficient time for seeding, so the new surface had to be turfed, and Andy and Graeme went turf hunting. "During my time at AFC Bournemouth I had been impressed with Lindum's Lokturf pitch and had used it with quite a degree of success." Having inspected the fibre reinforced sward at their turf farm near York, Andy and Graeme placed their order for 7,800 square metres.

Kestrel Contractors, the Hampshire based sports pitch contractors, were hired to renovate St. Mary's, having previously returfed and rebuilt the training grounds at the club. "We'd also returfed Bournemouth's pitch using Lokturf," explained Kestrel's Sales Director Billy Martin "and I think that was when Andy realised that the fibres reinforcing the sward stabilised the turf and resulted in noticeably less divots." 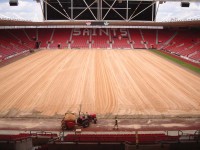 Kestrel stripped the surface and incorporated 350 tonnes of sand into the existing rootzone. "Due to the rootzone profile being only 225mm there was not sufficient head to make the pitch drain freely" Billy continued. "The club were concerned that the profile wasn't deep enough."

However, the ameliorated sand deepened the profile by 30mm which, coupled with the Lokturf at 40mm thick, added 70mm extra depth to the soil profile.

To further enhance the drainage, whilst laser grading, the opportunity to put a slight camber on the pitch was also taken. By the second day of the contract the turf was being laid.

Over two hundred and fifty miles north, Lindum Turf staff had been harvesting since 3.00am. "One thing we insist during the summer months, especially when we are dealing with the 1.1 metre wide big rolls, is that the turf is harvested and laid the same day," said Lindum's Managing Director, Stephen Fell. "Consequently, for Southampton, we were harvesting from 3.00am until 7.00am."

Lorries arrived at hourly intervals and, once loaded, began the seven to eight hour journey south. This meant that the last lorry load to leave Yorkshire each day arrived at St. Mary's at approximately 4.00pm, giving Kestrel ample daylight to lay the turf. They used their BRL 120 Big Roll Layer that can lay turf up to 1.2 metres wide in 15 metre lengths. It has a unique placement guiding arm, which ensures 99% accuracy. By 21st June the last roll of Lokturf had been laid, leaving just under four weeks for it to establish before the testimonial game.

"It had all rooted down really well and you would never have known we'd had a new surface," said Andy. "I spent the testimonial game watching the bounce and roll of the ball across the surface."