The Royal Leamington Spa Bowling Club, otherwise known as the RLSBC, has had a clubhouse, of one form or another, on the Victoria Park site since 1913. The park is owned by Warwick District Council. The existing clubhouse was built in 1995, ready for when the club hosted the Women's World Bowls Championship in 1996.

Originally, there was a single bowling green on the site. A second green was added ten years later, then a third, and finally, with the arrival of the England Women's Bowling Association's National Championships, a fourth. In 1995, a fifth green was added, also in readiness for the Women's World Bowls Championship.

RLSBC is the home of the Bowls England Ladies National Championships. It has also hosted a number of Bowls England Under 25 International matches and Bowls England Junior Ladies Trials. A number of institutions, such as the Civil Service, also host their national finals at the club.

RLSBC run a full season of men's and ladies fixtures against other local clubs, the men generally playing on Saturday afternoons, and the ladies mid-week. The club enters four men's teams in a local mid-week, day-time league and a team in a mid-week evening league, with the ladies entering teams in two mid-week evening leagues. Tuesday evening is Club Night which takes the form of a mixed triples league, before everyone retires to the bar!

During the close season, local league short mat bowls is played in the clubhouse. So, in essence, it is a very busy club with matches or practice sessions putting stress on the greens on a daily basis.

Robert Hoof began his career as a parks apprentice with Telford & Wrekin Council, and is well aware of the value of maintaining public open spaces and, in particular, formal parks and sports grounds.

"One of the reasons I came here was because Warwick District Council pride themselves on the high standards of their parks and open spaces," says Rob. "It's time local authorities and contractors stopped spending so much time on issues of poor service delivery, such as why the grass has not been cut. Instead, contractors should be accountable for assuring their own quality, allowing proper partnership working to develop, and looking at service improvements and innovation."

Rob employs the services of Glendale Managed Services who, he says, have been very responsive to his work ethic. An example of this is the flagship five green bowling facility in Victoria Park.

The day-to-day maintenance of the greens is in the care of Michael Finch, Head Greenkeeper for Glendale, who works under the supervision of the council's Greenspace officer, Simon Richardson. Both are guided by an agreed industry bowls programme which encompasses key monitoring tasks required on the greens in terms of measuring and recording speeds, moisture content, thatch content, organic content, nutrient status and soil analysis.

Michael is certainly a driven individual who always likes a challenge and, since his appointment, the greens have improved immensely. This is down to his passion, commitment and sheer desire to provide a top quality playing surface, traits he honed whilst head groundsman at Coventry City Football Club.

"Regardless of the level of sport is being played, I believe in providing the best surface possible," says Michael, "and I have really enjoyed improving the surfaces here. It is so different from football, not least the working hours. The old days of sixty hours plus per week are behind me," he says with a contented smile.

"Working for Glendale's means that my hours are more realistic, somewhere between forty and forty-five hours a week. I usually start around 7.00am and finish at 4.00pm." 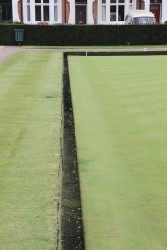 "Whilst maintaining bowls greens is somewhat different to football pitches, similar skills and inputs are required," he explains. "I'm still mowing, feeding, aerating and employing my presentation skills, but not in the public eye. I am enjoying a different aspect to looking after a high quality venue, which I'm relishing . The attention to detail, and how your day alters hour by hour, is driving me to perfecting the greens. Royal Leamington Spa has always had a great tradition of hosting major events, and I'm striving to bring these back into the town."

"I also look after thirty-one winter sports pitches and two cricket squares, all of which makes me want to give the best detail possible."

Michael started his new role back in 2010 and is now completing his third full bowling season. "When I arrived, many of the greens where a tad too soft, had sparse grass cover and lacked consistency. By increasing the inputs and carrying out more tailored renovations, I've managed to bring about some steady improvements."

"In 2010, my end of season renovations consisted of a thorough scarification - being more aggressive than in previous years - hollow coring down to a depth of 95mm, applying 4-5 tonnes of 70/30 of topdressing and overseeding with some bent fescue mixes. In 2011, the same renovation programme was implemented, but I added a Graden sand injection programme, backfilling with over eighteen tonnes of kiln dried sand, with the aim of firming up the greens."


"I also included some deeper aeration, using a vertidrain fitted with 12mm tines and going down to a depth of 125mm."

"Winter height of cut is generally kept between 6-8mm and mown every other day. As the season draws near, that will gradually be reduced to the summer height."

"During the season, it's been all about attention to detail, taking more time to set up the mowers, ensuring they are kept sharp and cutting at a consistent height of between 4-4.5mm. I mow them daily, double cutting on occasions, and use a turf iron prior to matches. When the nationals are here, they are rolled everyday to ensure pace, trueness and smoothness."

"A regular aeration programme, using a combination of sarell rollers and solid punch aerators, has been implemented to reduce surface compaction and allow better air movement within the soil profile."

Every year the venue hosts a number of top flight tournaments. In July it hosted the Bowls England Ladies National Championships. "For these high profile events, I reduce the height of cut to 3.5mm for the duration of the tournament to achieve a faster playing surface."

"I've put a balanced feeding regime in place using granular and liquid formulations throughout the growing season, beginning with a slow release 16:0:16 product in April, followed by regular liquid feeds every four to six weeks to maintain colour and vigour. When I took over, the greens where getting in excess of 130 units of nitrogen per year, which I deemed excessive so, after reviewing and changing the feeding programme, I'm now down to 80 units per year, with the aim of starving out the Poa and increasing fescue bent grass populations," explains Michael.

"A fully automated pop up watering system was already installed at the club and is deployed during the growing season to keep the greens watered. I use moisture probes to help evaluate the amount of water required and when to use the system. As you can imagine, it has been pretty redundant for much of this summer due to the sheer amount of rain we have had."

Michael has taken on an apprentice, Tim Rouse, to offer an additional pair of hands. "He appears keen to learn the art of greenkeeping, and I'm pleased with his progress to date. I can see plenty of potential if he continues to listen and be prepared to graft and learn the skills required to maintain fine turf facilities."

It would seem that Michael has made progress on many fronts. Many of the playing club members, and members of the public, have stated that the greens are better than they have ever been in terms of speed, performance and visual appearance. "It is nice that my hard work is paying off, and it's always good to get positive comments from club members and visiting players," he concludes.

It is certainly a good news story in terms of the partnership between Warwick District Council and Glendale, one that is ensuring that Royal Leamington Spa continues to remain one of the best bowling venues in the UK.