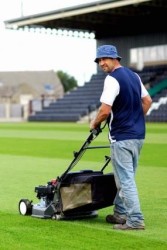 Up against all 68 clubs in the Blue Square Bet Premier, North and South divisions, Ward narrowly missed out on scooping the top prize, behind Alfreton Town FC and Halifax FC.

After arriving at the club in August 2010, Ward has overseen major improvements to the pitch at The New Lawn - producing the slick, fast-passing surface requested by the manager and making significant strides towards creating the UK's first organic football pitch.

Ward said: "It is an honour to be recognised considering the massive changes that have been implemented over the past year.

"It's been a challenge to create a surface that not only suits the style of fast-passing game that David Hockaday wants Forest Green to play, but also stands up to the rigours of 30-odd games through a particularly cold winter and at the third highest altitude of any stadium in the country.

"Added to that we've been transforming our approach in order to create an organic football pitch; using treatments such as natural organic fertilisers like seaweed rather than typical energy intensive nitrogen-based fertilisers.

"We're using methods no one has tried before on a football pitch and it's been a steep learning curve, so to grab third place in such a transitional year is great but I'm a perfectionist and we're confident the pitch will be even better this season.

"It's an exciting year ahead for the players and fans but also for grounds staff. We want a surface that allows us to play fast, attacking football throughout the season, and is the best quality, most eco-friendly pitch in the league."
Ads by Google

Now in their 10th year, the Groundsman-of-the-Year awards, were set up to recognise the contribution of these unsung heroes of the grass roots game and encourage the development of groundmanship.

FA, facilities and investment administrator, Andrew King said: "The judges reported a particularly high standard of groundsmanship across the country despite the adverse winter weather, and we would like to thank all those who submitted nominations this season Stroud News /Journal