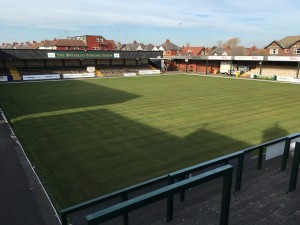 Growing conditions have been kind to the perennial species of browntop bent and red fescue. The green has dried out considerably from the visit in January where the ground was saturated: so much so that it was deemed appropriate to apply an application of Maxwell Soluble Iron onto the green in order to blacken the moss. It has then been scarified lightly in two directions to stimulate the perennial grasses to tiller and fill in the space that was occupied by the pleurocarpous moss.

The green was given a liquid feed to support the recovery that would be needed after invasive treatments at a difficult time of the year; the grass plant commonly has a requirement for sulphur at this stage of the growing season and this was supplied in the form of SolControl Soluble Fertiliser 24-8-12 at a rate of 6.6 kg's over the green. This was mixed with an application of SeaAction seaweed to promote beneficial soil fauna and enhance the availability of nutrients. This is a natural chelate that mixes extremely well with many formulations and can be a standard addition to many liquid applications. As we commence the growing period it is helpful to give some thought to supporting the natural soil fauna that have a beneficial relationship with the perennial species. 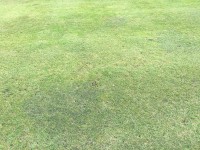 After undertaking a PWS analysis it was easy to determine that combining these two ingredients with the Bullet Complete Trace Element package ensures that all the nutrient requirements of the grass plant are met, providing peace of mind for March and April.

Toadrush is still present but it has been decided to deal with this at the end of the playing season. It benefits from a moist surface and although the green drains well, there is historic issue with thatch at the surface. This has largely been bought about because of the lack of aeration. There is a quarter inch layer of thatch that is holding moisture at the surface and creating conditions locally, which favour toadrush, hopefully a vigorous campaign of aeration over the winter should help reduce this problem though the lack of ability to aerate during the growing season is a common problem for many clubs. Undeniably aerating the green during the playing season is out of the question, any disturbance to the playing surface will result in severe criticism and with so many visitors there are few opportunities to undertake any invasive work that 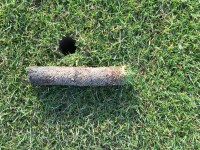 will result in the type of aeration that is required to seriously reduce thatch levels. However if we keep pushing the aeration that is needed out of the growing period we can't hope to obtain the necessary recovery that we need for a healthy sward and a compacted surface will continue to favour Annual Meadow-grass, a weak species that suffers from disease and gets kicked out leaving areas where moss can flourish. The solution, and one that many clubs are moving toward, is to find a method of aerating during the playing season that doesn't disrupt the roll of the wood, using microtines with as little heave as possible. Hopefully the Waterloo will be moving in this direction over the course of the current playing season.